I OPEN my eyes and, without lifting my head from the pillow, force myself to focus on the view that all but fills my cabin’s windows.

Tall mountains, shaded a menacing khaki by lush carpets of shrubs covering these inaccessible slopes, climb abruptly from the water before disappearing into a crown of early morning mist that brings the sky down like a winter fog.

The ridges of the Yangtze’s Wu Gorge are so sheer a mountain goat would have trouble forging a path. This is the flooded landscape of China’s Three Gorges, chasms that were twice as deep only two decades ago before the vast dam was built downstream and the water raised by 100m. 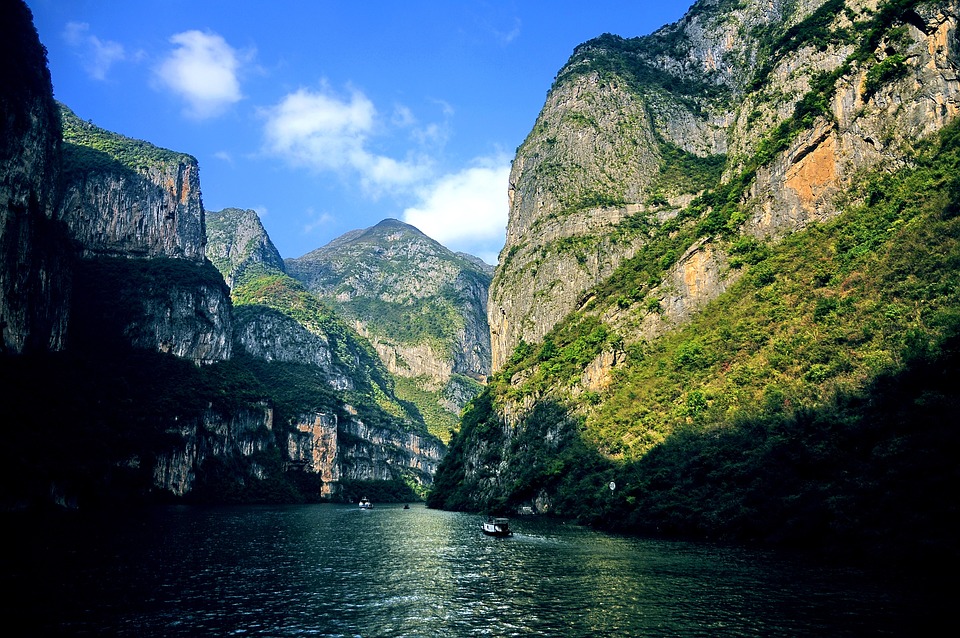 It is the corner of China that was changed forever when the Yangtze River was flooded to drive the hydro-electricity plants needed to power the country, and no settlement is much more than 15 years old. Stalinist apartment towers have replaced humble farmhouses, which now lurk far below the cloudy copper-green water.

In Wushan, a riparian metropolis of 100,000 residents that crouches near the western end of the spectacular Wu Gorge, local guide George explains that the warren of apartment towers and public buildings we see packed on to the riverbank is “New Wushan’’ with “Old Wushan’’ flooded in 2003 and now submerged to depths of 90m.

“This was a small mountain city then, we had a river of only 1m or 2m deep, and now 2000 years of history and ancient buildings are at the bottom of the Yangtze,” he says.

“But being higher had made a better life and my family moved in 2002 to a big, new house that is more spacious going from a home that was 40sqm to one that is 150sqm and now we have two toilets with one Western style.’’

George is our host for a side trip into the Lesser Three Gorges, a string of rocky formations carved by a Yangtze tributary that meanders back from Wushan.

He tells stories about life in the valleys before and after the dam, and points out everything from fish traps and temples to a family of monkeys living on a rocky shoulder.

This former English teacher, who says he turned tour guide because it was easier than corralling rowdy students, fondly remembers the days before the dam when locals would ground boats on gravelly beaches.

This is the second morning of my four-night voyage along the Yangtze, China’s longest waterway and the subject of countless fables and folk tales.

On our first day drifting west from Yichang to Chongqing aboard Yangtze Gold Seven, built in 2011 and with a capacity of 446 passengers, there was a visit to the Three Gorges Tribe which is a mountain community that has managed to maintain its traditions in the face of enormous progress, and a shore excursion to inspect the dam.

But last night the scenery was of concrete enclosures in which we floated as the captain guided Yangtze Gold Seven through the five locks that lift and lower ships past the Three Gorges Dam.

We entered the first of the five locks at dusk and my travelling companions, a mix of domestic and international travellers including many Australians, gobbled dinner and dashed to the upper decks to watch our vessel climb.

It was a surreal experience, with the silence in each lock’s concrete sarcophagus interrupted only by the extraterrestrial squealing and shrieking of the apparatus as it pumped and pushed water between levels.

I went to bed as we passed the fourth and fifth locks, leaving my balcony doors open while I read and noticing the concrete walls sinking as I turned the pages.

I took one last look at the orange lights of the dam disappearing into the distance as we steamed away from the last gate.

While there are shore excursions every day of this journey — a climb to Fengdu’s Ghost City, a jaunt to White Emperor City, an expedition into the Mini Three Gorges — moving along the river affords almost as many insights.

Yangtze Gold Seven cruises through valleys that feel almost prehistoric, past bucolic villages and beside cities that appear to sprawl forever.

Rusty and grimy boats and barges chug past us, carrying seemingly everything from shipping containers and semitrailers to piles of sand and barrels of chemicals.

We drift through Qutang Gorge, a narrow passage with perpendicular limestone walls so tall they block the sun from reaching the water, and I spend hours watching the scenery pass the balcony of my cabin before the colour drains from the day as afternoon turns to evening and the sun settles behind the serrated peaks of a black mountain range.

I see old and new collide everywhere, such as terraced rice fields abruptly giving way to a metropolis rammed with skyscrapers bathed in nocturnal neon.

I soon realise there can’t be many places in this world where travellers can comfortably cruise through a landscape that shifts so easily from one century to the next.

• This story first appeared in The Australian on Saturday, November 15, 2014 •