I SPENT the morning in Burns country.

That’s Robert, not Monty, which means I was exploring a quiet corner of Ayrshire in Scotland rather than a nuclear plant in Springfield.

Robert Burns, who was born in 1759 in the hamlet of Alloway just 3km from Ayr, is not only considered to be Scotland’s favourite son but the country’s national poet.

He penned his first poem after the harvest in 1774, about a woman called Nelly Kilpatrick who helped the aspiring farmer in the fields, and during the next couple of decades he went on to pen dozens of verses.

While his most famous works include Auld Lang Syne, To A Mouse, Tam o’Shanter and A Red, Red Rose he was often inspired to write about the things he saw around him in Ayrshire.

Visitors can see the places that inspired Mr Burns by visiting Alloway where the cottage he was born in has been protected, a monument was constructed in his honour, and a museum was built to house some of his treasures.

The Robert Burns Birthplace Museum is brand new – it was officially opened only last week – with the building set close to the brig (that’s a bridge) and the kirk (that’s a church) that feature in Tam o’Shanter.

I visited Alloway with Scottish Blue Badge Guide Kenny Hanley who explained why the man became an icon as we looked through the cottage he shared with his parents and three younger siblings for the first years of his life.

“His appeal was that he could touch the ordinary people but he could also reach the intelligentsia,” Ken says.

“He had the gift that he could take an average conversation or situation and write about it, his reputation grew by word of mouth, and when he published his first book the reaction was so incredible it had to be reprinted almost immediately.” 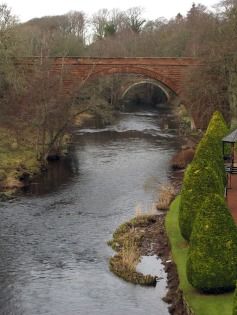