I TURNED my back on the bright lights of the big city today and headed to a quiet spot on Singapore’s northern edge to remember an important episode in Australian history.

With a car and a driver at my disposal for a few hours I decided it was a good time to visit the Kranji War Cemetery, the place where so many of the Australians who died defending Singapore during the horrific days of World War Two were buried.

Kranji is 22km from central Singapore, on a slope overlooking the Straits of Johore, and on the edge of the patch of territory the Australian military was told to defend as the Japanese made their way south along the Malaysian peninsula in 1942. 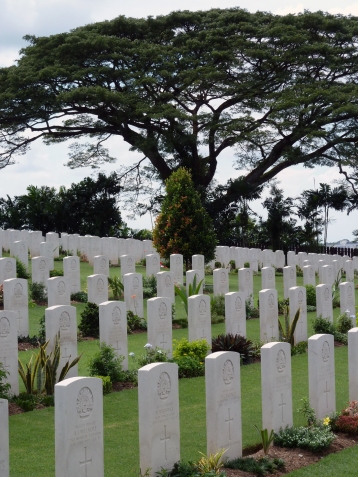 In the years before the Second World War the Kranji area was home to a military camp and, when the Japanese invaded neighbouring Malaya, it became an ammunition dump as Allied forces and the British command made plans to defend the tiny island.

On February 8, 1942, the Japanese crossed the Straits and landed at the mouth of the Kranji River, which is a stone’s throw from where the graves now dot the grassy slope.

“On the evening of 9 February, (the Japanese forces) launched an attack between the river and the causeway,’’ the Commonwealth War Graves Commission website explains.

“During the next few days fierce fighting ensued, in many cases hand to hand, until their greatly superior numbers and air strength necessitated a withdrawal.

“After the fall of the island, the Japanese established a prisoner of war camp at Kranji and eventually a hospital was organised nearby at Woodlands.

“After the reoccupation of Singapore, the small cemetery started by the prisoners at Kranji was developed into a permanent war cemetery by the Army Graves Service when it became evident that a larger cemetery at Changi could not remain undisturbed.

“In 1946, the graves were moved from Changi to Kranji, as were those from the Buona Vista prisoner of war camp.

“Many other graves from all parts of the island were transferred to Kranji together with all Second World War graves from Saigon Military Cemetery in French Indo-China (now Vietnam), another site where permanent maintenance could not be assured.

“There are now 4,461 Commonwealth casualties of the Second World War buried or commemorated at Kranji War Cemetery, and more than 850 of the burials are unidentified.”

The Chinese Memorial in Plot 44 marks a collective grave for 69 Chinese servicemen – all members of the Commonwealth forces, who were killed by the Japanese during the occupation in February 1942 – and the Singapore Memorial bears the names of more than 24,000 casualties with no known grave.

The Singapore Cremation Memorial, which stands immediately behind the Singapore Memorial, commemorates almost 800 casualties, mostly of the Indian forces, whose remains were cremated in accordance with their religious beliefs.

“The Singapore Civil Hospital Grave Memorial stands at the eastern end of the Singapore Memorial,” the website says.

“During the last hours of the Battle of Singapore wounded civilians and servicemen taken prisoner by the Japanese were brought to the hospital in their hundreds (and) the number of fatalities was such that burial in the normal manner was impossible.

“Before the war an emergency water tank had been dug in the grounds of the hospital and this was used as a grave for more than 400 civilians and Commonwealth servicemen.

“After the war, it was decided that as individual identification of the dead would be impossible, the grave should be left undisturbed.

“The grave was suitably enclosed, consecrated by the Bishop of Singapore, and a cross in memory of all of those buried there was erected over it by the military authorities.”

Today Kranji is a peaceful place, one of the few spots on this busy island that’s not washed with traffic noise, and on this oppressively hot day the only sounds I could hear as I walked the rows of white stones was a sprinkler shooting water across the lawns and the hypnotic buzz of insects.

While there are Australian soldiers, sailors and airmen buried right around the complex the first four rows are completely occupied with stones marked by the rising sun, and I strolled reading the names, ages and hometowns of these fine men that perished so far from home.

All the Australian graves look the same – the rising sun, the soldier’s name, unit, age, and the date he died – but some families asked that an additional sentence be carved into the stone just above the place it sits in the earth. 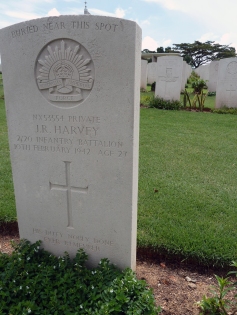 Some of these messages note that a soldier will be missed by a mother, wife or sister, some simply remember his parents’ name and his hometown, with others featuring some religious quote or a rousing patriotic comment.

But there was with a message that made me stop and think.

Someone at home, when they were told that their relative had a stone in Kranji War Cemetery, asked that the words “his duty remembered by those in Australia” be carved into the smooth piece of white rock.

Back in the 1940s or 1950s, when the words were carved, I suspect that was only a wish, but because Australia has embraced the men and women who joined our army, navy and air force during times of international crisis this is exactly what’s happening now.

So, next Anzac Day, when you watch the sun come up, think of Private Lindwall and remember a man who died a long way from home in a place he probably thought was hotter than hell.