“IT’S The Dorchester, Darling,” the voice behind me announced.

For a moment, as I was standing on the front step of my London hotel trying to locate the nearest underground station on my tourist map, I thought I was checked into the same address as Ivana Trump.

I casually looked around, pretending to peak at the clock near the door, to see if the voice did belong to Donald Trump’s ex.

It wasn’t Ivana but a squat lady dressed in a metallic gold trench coat with hair the colour of a red kelpie’s coat and carrying what I suspect was an authentic Birkin bag.

Yes, I’m staying at The Dorchester, a name that makes London cab drivers raise their eyebrows when you tell them where you want to be delivered and chauffeurs gently question your ability to pay the tariff as they drive you in from LHR.

”You do know it’s a very expensive hotel?” my driver Rodney asked as he negotiated the London traffic, obviously concerned that someone like me could afford to stay somewhere like that.

And, yes, it is incredibly fancy.

I was lucky enough to stay in some flash hotels last year — the Buenos Aires Park Hyatt, The Peninsula in Manila, Rome’s Sofitel at the top of the Spanish Steps, and the boutique Vie Hotel Bangkok — and while The Dorchester is just as luxurious, it’s presented in a very different way.

While most five-star hotels are all dark wood, marble surfaces, polished floors and white cotton bedding, The Dorchester looks like it was inspired by some elegant old English lady’s front room.

There is floral paper on the walls, a floral spread on the bed, and floral curtains hanging in the windows as well as plush armchairs with overstuffed cushions all covered in pastel fabric and antique-looking furniture.

The heart of The Dorchester is The Promenade – the ground-floor foyer, crowded with chairs and couches, that runs the full length of the hotel – which is the place to enjoy a drink or lounge over a slow high tea of finger sandwiches, colourful pastries, and bespoke tea.

It’s a space that looks like the drawing room of an elegant 19th-century London home with claret walls, golden columns, overstuffed vases, silk cushions and enormous light fittings hanging from the ceiling.

But that is all a good thing because you really get a sense of place staying in a room at The Dorchester, a hotel that will celebrate its 80th anniversary this year.

The Dorchester is a considerable improvement on the accommodations I occupied during my first visit to London almost 10 years ago, which had rooms so small only one person could open their case at any time with the other bags zipped up and shoved under the desk.

Before this visit to London I didn’t have a very high opinion of this place and, while the English city still doesn’t rank high on my list of favourite holiday spots, it’s now somewhere I would visit again and I think staying at The Dorchester has played a part in that.

During my first visit, when I stayed near Paddington Station, I seemed to spend all my time in the Underground racing from one tourist attraction to the next which made me think London was a spread-out city too big to do any walking.

But that’s not true and staying in Mayfair I was able to walk between the spots I wanted to visit with Buckingham Palace, Piccadilly Circus, Victoria & Albert, Oxford Street, and Westminster’s iconic attractions all in strolling distance.

Tonight, on my last evening in town, I walked from Piccadilly Circus back to The Dorchester, a journey that took just 30 minutes with lots of stops to take photos of the regal inner-city buildings all lit up on the inside and out. 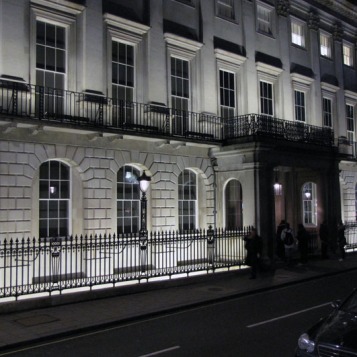 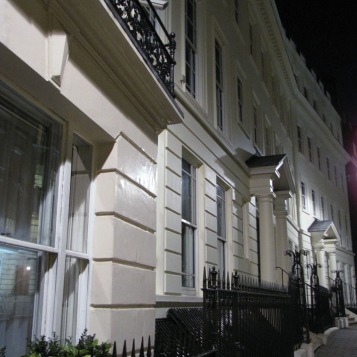 I have one more night here and then I make my first journey to the English countryside with a visit to Windsor on the itinerary for tomorrow, so expect my next post to have a royal theme.