SO far this tour of England has been all about the royal family.

I have visited Kensington Palace where a long line of princesses lived, seen the royal family’s collection of carriages at The Royal Mews, had a tour of Eton where William and Harry were educated as well as numerous kings both foreign and domestic, and walked around Windsor Palace.

Before this visit it was all just Henrys and Georges for me, I thought the war of the roses was a movie starring Kathleen Turner and Michael Douglas, and the only way I knew the difference between the two queens called Elizabeth was because Helen Mirren played them both on the big screen in the same year.

But that’s all changed and now I’m an authority on things like the line of succession and the size of the Queen’s horses, I can tell you where all the senior and reserve royals live, and recite endless facts about William and Kate who feature in every news program now it’s less than 100 days until their April wedding. 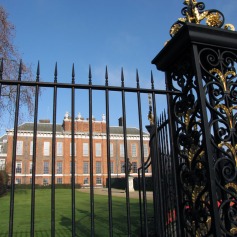 While Kensington Palace is still a royal home – the Lancasters and Gloucesters, as well as Mr and Mrs Michael of Kent, live in the building’s private apartments – there is one wing open to the public and visitors can explore grand rooms with high ceilings while hearing stories about the princesses who lived in the house.

Kensington was home to both Princess Diana and the Queen’s sister Margaret before they died, and the place William and Harry stayed with their mother, and the palace the young Victoria occupied before her uncle died promoting her to the throne.

I visited Victoria’s room and saw the bed she was sleeping in when woken to be told she was Britain’s new monarch, which was a beautiful suite with a view across Hyde Park to London’s skyline, and the stairs she was carefully escorted up and down as she was growing up.

After doing a few more royal attractions in London, which included eating lunch at William and Kate’s favourite restaurant Tom’s Kitchen in Chelsea – I was told he likes the burger and she orders the chicken Cesar salad – I left the big city behind and drove the 30 minutes to Windsor.

I was never terribly impressed by Buckingham Palace, and even less so after learning that none of the royals actually live there but the Queen uses it as her office visiting only on Tuesday afternoons, but Windsor was awesome with the medieval stone walls and towers dominating the landscape from its position on top of a hill.

A local Blue Badge Guide took me on a tour of the palace – not inside, we followed the walls which took us from the bridge over the Thames on one side to the Long Walk on the other – and I was shown the tower that accommodates the Queen’s private apartments.

The four-storey suite has, so I was told, magnificent views of Great Windsor Park as well as to Heathrow’s runways and the new fifth terminal.