Go with the flow …

THERE are some boat crews that refuse to drop anchor at night in this wide section of the Mekong River.

It has nothing to do with dangerous tides, unpredictable weather, or even concerns about running aground.

The Vietnamese mariners are frightened of ghosts, and they suspect the spirits of more than 50,000 Thai soldiers haunt this waterway.

“Nguyen Hue, one of our national heroes, defeated an army of Thai troops here in the 18th century,’’ our guide Le Van Sinh, from Sinhbalo Adventure Travel, explains as we drift along the stretch of brown water during a daytrip to the Mekong Delta.

“He lead rebellions in Vietnam and in 1785 one of his enemies asked for help from the king of Thailand, who sent his army here following the sea into the Mekong River, and Nguyen Hue was able to lock them into this place and kill all the Thai soldiers.’’

Sinh notes that the warlord, who is celebrated with a monument on the riverbank near the spot where he “trapped’’ the Thai soldiers as well as a main street in nearby Saigon, killed the invaders during a bloody bow-and-arrow attack and we marvel at the military might of the force doing such damage in this broad section of the river. 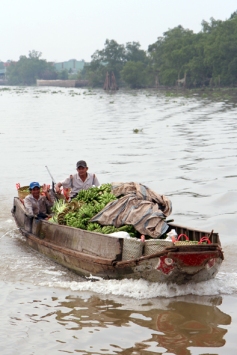 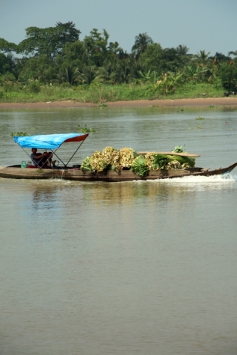 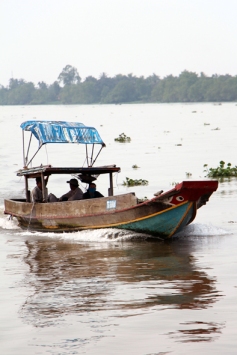 But there’s more to this stretch of water than an ancient battle and, as we cruise on a boat called the Violet that once served as a Mekong ferry before being converted to carry travellers on excursions from Saigon, we hear about everything from the local industries lining the banks to the cargo carried by the sampans we pass.

Sinh points out bridges built by the Japanese government to encourage locals to buy Honda motorbikes and carry produce to market by road rather than river, the spiral traps fishermen use to catch the fish that linger near the mangroves, and the barges hauling sand to My Tho to supply the building boom in the thriving settlement.

We pass one barge that looks like it’s sinking, so overloaded with dirt that the deck is under the surface with water rushing through the wheelhouse and only a robust wall around the cargo keeping the boat afloat as it chugs downriver.

We comment that the boat’s captain must have complete confidence in the performance of his vessel, and the behaviour of the waterway, to overload his vessel for an afternoon voyage towards the South China Sea.

Our crew for the afternoon, three sibling from the Tim family that own the Violet, are just as knowledgeable as the savvy barge captain with generations of relatives piloting ferries on the Mekong.

Sinh tells us the clan operated ferries across this northern branch, from My Tho to villages scattered around Ben Tre island, for decades but fell on hard times a few years back when a bridge was built as part of the new road network around Vietnam’s fertile southern corner.

Sinhbalo Adventure Travel helped convert one of the old ferries to carry tourists – designing a second open-air deck, adding a kitchen to prepare meals, building a toilet and shower at the stern, giving lessons on hosting international travellers – so the siblings could launch into a new industry and once again support their extended family.

“There were so many ferry boats on the Mekong that had nothing to do once the bridge at My Tho was finished,’’ our guide, who was raised in nearby Cai Be, explains.

“We change the old boat to make it comfortable for people to cruise for a long time, and the family has already made back their investment.’’

While one brother pilots the Violet, following the northern bank as it winds towards Cambodia, two sisters fuss in the galley to prepare lunch and it’s not long before we drop anchor to eat near a spray of purple blooms growing in a patch of water hyacinth.

The family practice the Cao Dai religion, and are life-long vegetarians, so guests on board the Violet eat like they do and our midday meal features an array of tasty dishes made from vegetables and fruit grown in the Mekong Delta which is Vietnam’s rice bowl.

There’s a noodle dish, two plates of tofu, vegetable spring rolls, Mekong rice, slices of bright-red tomatoes and succulent cucumber, a bowl of steamed morning glory, and mushroom soup with a pile of sliced pineapple providing a sweet note to conclude the feast.

After lunch we continue our voyage and I turn one of the bamboo chairs to the side, settle back resting my feet on the rail with my legs in the sun, and eat slices of the sugary pineapple while watching life on the river drift past.

When I first visited Vietnam in 1997 it was a big ask to do a daytrip to the Mekong Delta from Vietnam’s fascinating southern city, with old roads making it a long and exhausting journey, but since a bypass linked central Saigon and My Tho it’s now possible to visit for just a few hours.

“Sinhbalo’s daytrips to the Mekong Delta visit in My Tho where we board the Violet and cruise to Ben Tre island,’’ Sinh says.

“We go into smaller canals on sampans, where were find places to walk to see a farmer’s house and look into the gardens to see the plants that grow here, and after paddling along a quiet canal for a while it’s back to the Violet for lunch.

“We go to another island to visit a family making coconut candy, call at a bee farm to taste honey, and if people are interested we can visit one of the floating markets in the Delta or even stay overnight and do a home stay with a local family.

“Travellers should come to the Mekong from Saigon, at least for a day, because they will see a river system with so many canals and people living a traditional life.

“I find travellers love to see the Mekong because it’s so different from where they live.’’

Vietnam’s Mekong Delta – including the many island and tributaries of the world’s 12th-longest river – stretches south from Saigon, between the South China Sea and Cambodian border, and the drive takes 90 minutes following the new roads to travel between the city centre and My Tho.

Sinhbalo Adventure Travel offers daytrips and multi-day tours to the Mekong River, as well as other parts of Vietnam, and will also work with travellers to design bespoke itineraries including transport and a guide. See www.sinhbalo.com

THIS STORY ORIGINALLY APPEARED IN THE COURIER MAIL ON SATURDAY, APRIL 19, 2014