ON November 1, 1914, the first Anzac troops bound for the Great War’s bloody battlefields left Albany in a convoy that stretched more than 12km into the Southern Ocean when it steamed away from the West Australian coast.

For many of those on board the 38 vessels it would be one-way journey as they would perish in battle on Gallipoli’s cliffs and in the Western Front’s trenches during a war that lasted a little over four years and claimed the lives of 20 per cent of the Australians deployed to defend king and country.

The ships came from around Australia and New Zealand, sent to Albany’s King George Sound to refuel and resupply and wait for the warships that would escort them across the Indian Ocean, with many of the 30,000 soldiers on board catching a final glimpse of their homeland as the boats crept into the Southern Ocean.

Standing on a shady slope at Albany’s Princess Royal Fortress today, with the sapphire blue of King George Sound and the windswept peaks that enclose the harbour stretching before me, I can gaze across the same landscape those very first Anzacs saw as they left for war with this rugged corner of the Australian coast hardly changing in a century.

I imagine soldiers standing on deck, already homesick after leaving families just a few weeks before and filled with a mix of enthusiasm and trepidation about what was waiting across the ocean, gazing back at the waterside slopes carpeted khaki by weather-beaten bushes and stately eucalypts.

Only a handful of the men left the ships in Albany, shuttled ashore to pound the sleepy settlement’s streets in a farewell parade before being quickly ushered back to the boats, with many of the soldiers scribbling notes that were stuffed into glass bottles and thrown overboard as the only option for getting one last message home.

It seems only apt that this hillside, beside this significant stretch of water, will soon accommodate Australia’s new National Anzac Centre with the museum housing exhibits to illustrate Australia’s Great War history and provide a place to reflect on the experience of the men and women that sailed to war from this very spot.

“The departure of the first Anzac convoy from Albany was the first big act of Federation,’’ explains James Dexter, the Western Australian Museum’s director of regional development, as we gaze across the whitecaps to the place the ships anchored.

It was a huge logistical operation at the time, gathering 30,000 men and 7,000 horses from around Australia, resupplying the ships in Princess Royal Harbour, and getting the convoy across the Indian Ocean when three German warships were known to be operating in the area.

It was the first time so many Australians from all the colonies were brought together in one place, so it not only plays a part in Great War history but the history of Federation, and we wanted to stress the importance of this spot in the National Anzac Centre by featuring this view across King George Sound.

“We will have sound cones inside the museum where visitors can listen to descriptions of what it was like for the soldiers to leave Australia while looking out at that view.”

James, who leads the team producing the museum’s exhibitions, says the National Anzac Centre will use a mix of media – everything from audio-visual displays shown on oversized monitors to technology that lets visitors track a particular person – to tell the stories of 34 World War One soldiers.

“We will focus on 32 individuals that left for the Great War on that first convoy, as well as one Turkish soldier and one German soldier,” the curator explains.

“We decided to tell those 34 stories because we have an image of each person, we have something of them speaking which could be a letter home or a diary, and we have an object that relates to their service.”

“The Western Australian Museum has loaned 50 items to the National Anzac Centre, including one of only two Lewis guns in Australia, and we have other pieces from the Australian War Memorial and New Zealand because Anzac is something that stretches across the Tasman.’’

The National Anzac Centre, which sits in the Albany Heritage Park beside Princess Royal Fortress and the Desert Mounted Corp Memorial at Mt Clarence, will open on November 1 with the ceremony scheduled during a long weekend of commemorative events to mark the first convoy’s departure exactly a century earlier.

A fleet of warships will begin to gather in King George Sound on October 30 with a ceremonial sunset and harbour lights display taking place on October 31 before a troop march, commemorative service in the Anzac Peace Park, community concert, and symbolic departure of the ships on November 1.

The military vessels, which are coming from around the world to take part in the Anzac Albany commemorations, will be open for public tours on November 2 with a collection of exhibitions and displays happening in buildings around town all weekend. 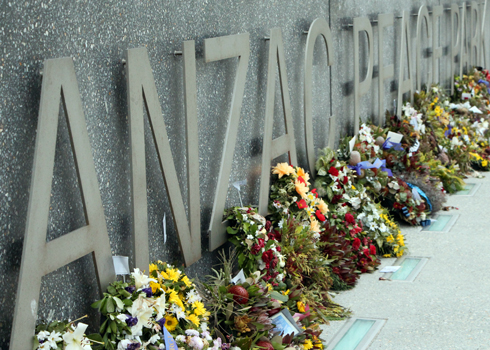 Albany is 400km from Perth, a drive that will take at least four hours via the Albany Highway, with Virgin Australia flying from the West Australian capital to the south-coast settlement several times a day during the week and on weekends.

John and Forrest Woodbury from Albany Whale Tours offer voyages on King George Sounds for those keen to get close to the area the ships in the first convoy anchored, while Mt Adelaide and Mt Clarence in the Albany Heritage Park provide elevated views across the harbour.

More For details on the National Anzac Centre and the Anzac Albany commemorative weekend from October 30 to November 2 visit the official website (amazingalbany.com)

THIS STORY ORIGINALLY APPEARED IN THE DAILY TELEGRAPH ON AUGUST 18, 2014 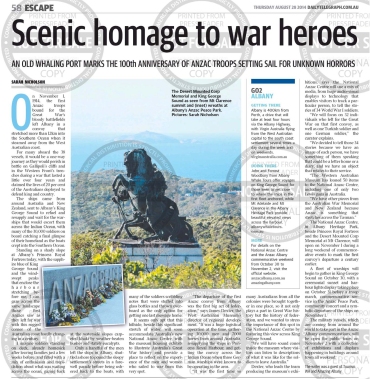 Click here to see the online version of the story.