CHEESE, chocolate and banking come to mind when Zurich is suggested as a holiday destination.

But there’s more to this sophisticated Swiss settlement than guidebook stereotypes, with the city home to an enviable food scene, glorious summer days and white winters, an established art and design community and an assortment of world-class festivals. And, for a place seen to be set in its ways, there’s a lot of new stuff happening.

The city’s neighbourhood du jour is cosmopolitan Zurich-West, a gentrified district that’s evolved from an industrial estate where “machines clattered and soot hung in the air” to an urbane oasis bursting with art and design.

The university’s arts and science faculties now occupy the remodelled Toni dairy – once Europe’s largest milk-processing facility – and the Prime Tower (Hardstrasse 201, Zurich) is Switzerland’s tallest skyscraper with a selection of bars and restaurants including Clouds on the 35th floor.

Frau Gerold’s Garten (Geroldstrasse 23/23a, Zürich) started as a beer garden but morphed into a local haunt with casual places to drink and dine while Im Viadukt (Viaduktstrasse, Zürich) under the railway arches has boutiques and galleries as well as a Market Hall that’s home to 20 artisan food producers.

In a city staked with regal old-world hotels – the fairytale Dolder Grand (Kurhausstrasse 65, Zürich) is an icon – there are still new accommodation options popping up.

The vegan movement is big in this part of Switzerland with Elle ’n’ Belle (Limmatstrasse 118, Zurich) the latest cafe to open alongside established eateries like Vegelateria (Müllerstrasse 64, Zurich) and Sanus Viventium (Hauptplatz 4, Rapperswil).

Fondue is as popular as ever, with the Fondue Tram and Fondue Cruise combining the cuisine with a sightseeing tour and Piz Europe (Europaallee Passage, Zurich) serves seven varieties of the melted-cheese meal.

Delicatessa, in the basement of Globus (Schweizergasse 11, Zurich) department store that recently reopened after a two-year renovation, is a gourmet paradise stocking everything from the finest Swiss produce to rare imported goodies.

The Food Market in the basement of Jelmoli (Bahnhofstrasse, Zurich) department store is worth a visit and Razzia Restaurant & Bar (Seefeldstrasse 82, Zurich) now occupies the historic Razzia Theatre, which was Zurich’s first purpose-built cinema, constructed in 1922.

Festival season starts when the weather warms up and there are dozens of events in the schedule this year.

More than 80 shops and studios open during Kreislauf 4+5 from May 29 to May 31, the Zurich Festival happens between June 12 and July 12, and Zurich’s food festival Il Tavolo takes place from June 24 to 28.

The settlement will be transformed into “a city of theatre” from August 6 to 23 during Zurcher Theatre Spektakel, the Diamond League track-and-field meet is set for September 3, and the Zurich Film Festival is in town between September 24 and October 4.

“For the best views take a trip to the top of Zurich’s own little mountain Uetliberg, there are sparkling vistas over Lake Zurich and the Alps from the summit, by catching the local railways the S-Bahn 10 from Zurich Hauptbahnhof.

“The 24-hour Zurich Card costs 24 Swiss francs and is available at train stations and the airport and can be used for tram, bus, train, boat and cableway in the city and offers free entrance to most Zurich museums.”

Cathay Pacific will launch a daily service between Hong Kong and Zurich on March 29 with a Boeing 777-300ER in a four-class configuration – first, business, premium economy and economy cabins – flying the route.

Zurich Tourism has more information for those planning a stay in the Swiss city.

THIS STORY ORIGINALLY APPEARED IN ESCAPE ON SUNDAY, MARCH 22, 2016 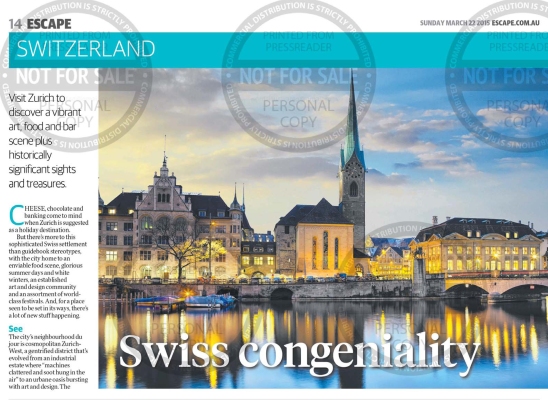 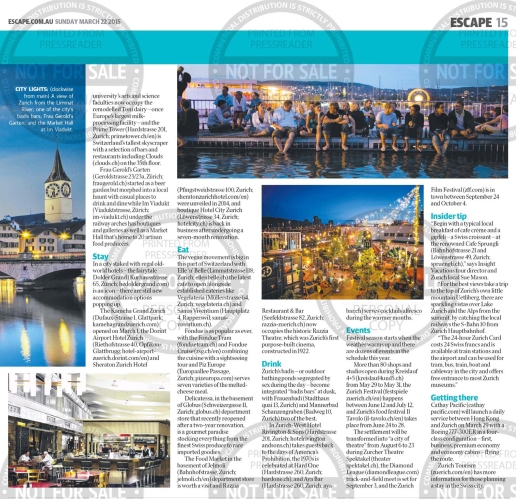