ASIA has sky-high socialising down to a fine art.

Right around the region there are rooftop bars perched in lofty locations that provide the perfect place to match a casual drink with a remarkable view after – or even during – a day playing tourist.

2. Step back to the 1920s at Speakeasy, crowning Bangkok’s Muse Hotel, with Prohibition-era touches such as drinks served in mason jars and cool jazz melodies.

3. The Rooftop Garden at Saigon’s Rex Hotel has been serving drinks since 1959. Vietnam War correspondents retired to the sixth-floor terrace after attending the American military’s daily briefings downstairs.

4. The movie Lost In Translation thrust the Park Hyatt Tokyo’s New York Bar towards infamy with this 52-floor venue sitting inside floor-to-ceiling windows that make it an all-weather haunt.

5. Ascend to the 33rd level of Kuala Lumpur’s Traders Hotel to take in a perfectly framed view of the city’s landmark Petronas Towers while enjoying a beverage by the SkyBar swimming pool.

6. When in Singapore linger at the Fullerton Bay Hotel’s Lantern Bar with this rooftop site, only a few storeys above street level, serving bespoke cocktails that match the sophisticated setting.

7. Le Moon Terrace Bar at Amanjaya Pancam Hotel was Phnom Penh’s first rooftop destination when unveiled in 2010. It offers a place to catch a cool breeze while gazing at life on the Mekong River opposite.

8. If you’re after uber-cool on the southern end of the Bund, head for The Roof on the top floor of Shanghai’s chic Waterhouse Hotel and savour a chilled vibe while contemplating the remarkable light show.

9. Rock Bar at Bali’s Ayana Resort & Spa is a casual clifftop – rather than rooftop – spot with its open-air patio balanced on the rocks 14m above Jimbaran Bay.

10. The Pullman Saigon Centre is the southern Vietnamese city’s hippest address with Cobalt on the 30th floor serving tapas and drinks that put an innovative twist on tradition.

11. It’s all about the bling at Ozone, on the 118th floor of Hong Kong’s Ritz-Carlton, with wall-to-wall sparkle ideal for the venue crowned the world’s loftiest bar. 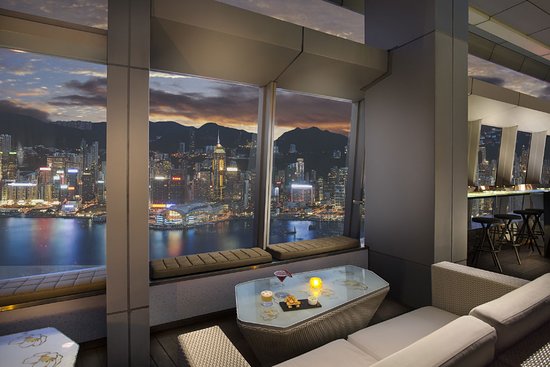 12. W Beijing is the Chinese capital’s newest spot to stay with the funky X25 – think neon, chrome and an LED-lit catwalk that welcomes guests – on the hotel’s highest floor.

13. Spend a sky-high evening in the Thai capital at the Banyan Tree Bangkok by dining at Vertigo, on the 61st floor of the Sathon address, then taking a few steps even higher to the blue-hued Moon Bar.

14. Sir Elly’s Terrace is a Shanghai hotspot with this Bund-side bar on the highest floor of the Peninsula Hotel, offering a 270-degree view across the hi-tech skyline. 15. The rooftop at the Caravelle Saigon – creatively named Saigon Saigon Bar – promises a colonial charm from lunchtime until late at night. Grab a table at the edge of the 10th-floor platform for the best view.