JULIAN Stilles is a mailman, but don’t expect to see this New Zealand postie peddling a bicycle or pushing a cart.

Stilles is the postman in Queen Charlotte Sound — the most eastern waterway in the Marlborough Sounds at the top of New Zealand’s South Island — and six days a week he pilots a powerful catamaran to the isolated properties around the inlet to deliver mail, provisions and sometimes even people.

He leaves Picton at 1.30pm on what is the “only officially licensed New Zealand Post delivery service by water in Queen Charlotte Sound” and zigzags between the bays to visit the folks that live well beyond the reach of the roads. 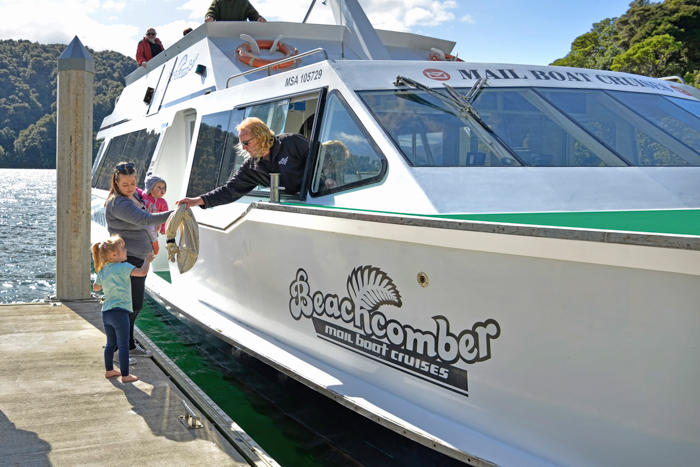 But it’s rare for Stilles to do this run on his own with travellers signing up to accompany him for half-day tours of this rugged corner of coast, hikers and mountain bikers transferring around the Queen Charlotte Track, and holiday-makers heading for the isolated lodges in the Sound.

There are three routes and today we’re following the yellow track that creeps around the Tory Channel before crossing Queen Charlotte Sound to Ship Cove and Endeavour Inlet on a circuit that takes a little over four hours to complete.

The first stop on this waterborne expedition is a bay that’s now home to a children’s camp but was once at the centre of an American strategy to shelter the Pacific fleet during the darkest days of World War 2 when the Japanese military was surging south towards Australia and New Zealand.

“The United States had a contingency during the Second World War, at the time the Japanese were winning the war, to base the US Navy fleet in the Marlborough Sounds,” Stilles explains as he positions the mail boat beside the dock to make the drop.

“The plan was to string submarine nets and hide the smaller vessels in the side bays and the larger vessels out in the channels, but that didn’t happen because the battles at Midway and the Guadalcanal saw the Allies take the momentum and stop the Japanese advance.”

At our next stop, a stately dwelling that welcomes travellers keen to do a homestay in the Sounds, there’s someone already waiting on the wharf while a couple wearing gumboots and bright flannel shirts appear from the bush as we near the third rendezvous to reach for the mail when our captain holds the heavy sack out his bridge window.

As we leave this side bay we fall in behind an inter-island ferry, a lumbering ship that’s just left Picton bound for Wellington across the Cook Strait, and the mail boat bounces around for a few minutes as we follow in her wake and negotiate the current at the mouth of the Tory Channel.

“An enormous amount of water squeezes through this little gap,” Stilles says of the opening between Arapawa Island and the mainland.

“A lot of tide comes through because, not far from here, the water is crossing from the Tasman Sea to the Pacific Ocean between New Zealand’s North and South islands and the tide can get up to three knots in the channel and even faster around the points.”

Before our next stop, which is at a pier beside a grand vessel that once belonged to the King of Denmark and arrived in New Zealand with bullet holes in her hull after encountering trouble passing through the Suez Canal, Stilles retrieves two dog biscuits for a pair of frisky puppies excited about our arrival.

The dogs dart around as we approach, dashing from one side of the pier to the other as they try to pick the place we will land, and this homeowner must retrieve her own delivery with Stilles busy distributing treats to the animals during the brief break in our voyage.

“There are dogs at a lot of the places we go so we carry biscuits to feed them,” he says, pushing the vessel into reverse and backing away from the jetty where the dogs are still busy with their booty.

“At one place we go the dog is so well trained he brings the mail bag down to the boat, has his biscuit, then carries the mail bag back up the hill to his boss.”

We cruise past floating salmon farms with high fences to keep the fur seals from the fish, the remains of whaling stations that operated in Queen Charlotte Sound before the practice was outlawed in 1964, and a landmark where a bloody battle took place between Maori tribes from the North and South islands.

I quickly lose count of how many stops we make and, as we turn back towards Picton to visit the folks living on the other side of the Sound and stretch our legs on a beach where Captain Cook beached the Endeavour to service it during a long voyage, Stilles tells me he doesn’t keep track of the number of drops he makes on each run.

“We have three routes, but even the days I do this yellow route are different because we always visit different places,” Stilles says.

“We only go into a bay when we have mail or groceries to deliver, so the number of stops vary from day to day and week to week, but regardless of the route I always take the time to enjoy this beautiful stretch of water where I work.” 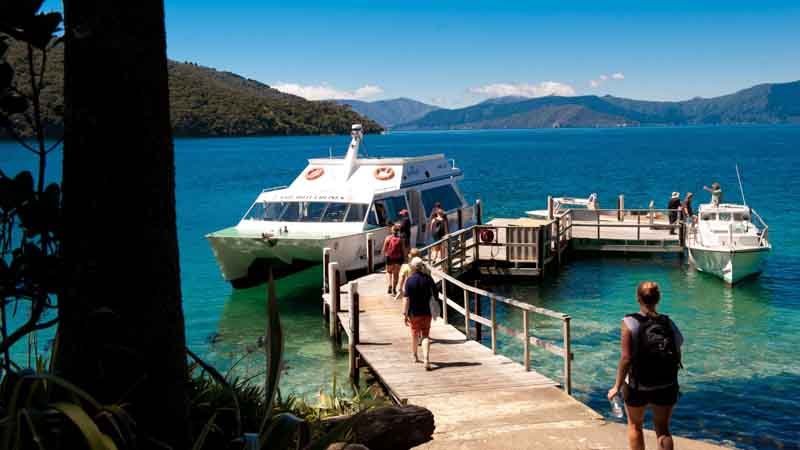 • This story originally appeared in Escape on Sunday, September 6, 2015 •