DO not fret if you haven’t heard of the Keukenhof.

This annual flower garden on Amsterdam’s rural outskirts is a Dutch icon but it opens just eight weeks a year and is hardly as famous as the canals and clogs that top the tourism hit list in The Netherlands.

While the Keukenhof may be a revelation to many, it’s reason enough to plan a springtime jaunt to The Netherlands with the 35ha estate, occupying what was once the kitchen garden of an aristocratic family’s hunting lodge, forming a horticultural canvas for the country’s tulip growers to show off their considerable cultivation skills.

Every year the country’s best bulb producers submit their premier products, one of two tulip varieties from heritage favourites to the most innovative incarnations, and carpet this shady plot between Amsterdam and the coast in a rainbow of botanical colour.

Some suppliers stick to one bold bloom, others mix pastel shades in blocks that look like squares of pretty patchwork fabric, and some separate their space vertically by featuring one variety growing close to the ground and a contrasting canopy in another dramatic shade.

I am on a Tulip Serenade itinerary operated by Amadeus Cruises, a round-trip from Amsterdam aboard the new Amadeus Silver III, on a cruise that stretches across eight days and starts with a tour of the Dutch capital before cruising to Hoorn, Arnhem and Middelburg, then across the border to Ghent, Bruges, Antwerp and Brussels.

Today, the final afternoon of this agreeable meander around Europe’s Low Countries, we venture back into The Netherlands and see Rotterdam’s Kinderdijk windmills before coaches collect us at Utrecht for what our guide Diana van Angeren calls the “small hour” drive to the seasonal tulip compound.

“Keukenhof means kitchen court, as this park now occupies what was once a garden growing vegetables and herbs for the noble family when they were at their hunting lodge,” van Angeren explains as we linger at the heart of this estate of seven million blooms.

“After World War II, our flower growers decided they must have an exhibition of the bulbs they were cultivating to show buyers around the world what they were able to supply, so they leased this land from the count.

“During the 18th century, a famous gardener made the layout for the noble family, with lots of shady corners and the big lakes, so when the bulb growers came in the old park was ready for the flowers with a patchwork of plots.

“Now every year 150 bulb producers are invited to send their products. They work with the designers to make their part as beautiful as they can, but the only right they have is to display a little sign with their name beside their most beautiful flowers.”

Van Angeren provides an orientation, suggesting a strolling route to see the best of the manicured grounds while also taking in pavilions named after Dutch royals where cut flowers are creatively displayed, and then there’s time to simply wander.

Today’s display of springtime colour isn’t the first time we’ve seen flowers on this journey, with displays along the Tulip Serenade route, in cottage gardens and pots on the footpath, almost paving the way to the gates of Keukenhof.

Every day for the past week has meant a pleasing combination of sailing or being stationary but within reach of pretty ports.

When Amadeus Silver III is parked, it’s often just an amble to the cathedrals and cafes that mark the heart of each historic hamlet, so passengers not opting for guided tours can easily explore at their own pace.

I do a bit of both and join the local host at most stops — a stroll through Middelburg to appreciate merchants’ harbourside homes, a lap of Antwerp’s opulent railway station, a pilgrimage to Arnhem’s wartime cemetery — but bid the group farewell in each settlement’s centre for extra exploring before making my way back to the dock.

When the ship is moving, there’s the gentle business of traversing locks, drifting below bridges that swing open to let us pass, cruising along canals where cyclists pedal waterside footpaths, and navigating rivers flanked by trees silhouetted against the sun at dawn and dusk.

The Netherland and Belgium are ideal destinations to indulge in a spot of river cruising with levels in canals, rivers and lakes monitored and maintained so sailing isn’t interrupted by too much, or too little, water.

Most of my companions are seasoned river travellers with many returning to northern Europe to focus on one corner of the continent after doing longer voyages between Amsterdam and Budapest.

Amadeus Silver III’s hotel manager Kerstin Scholl says Amadeus Cruises is constantly refining itineraries, offering new experiences to those returning to Europe’s “inland blue”, with much of the 2016-17 offering focusing on specific regions such as the Tulip Serenade jaunt around The Netherlands and Belgium.

“We have many repeat guests who want to do all the European waterways instead of just the Danube,’’ she says. “Amsterdam to Basel is always popular because you do Germany and Switzerland; [The Netherlands] is booked when the Keukenhof is open, and lots of guests want to go to France and sail on rivers such as the Seine and Moselle, and Passau to the Black Sea is also unique.”

Amadeus Silver III, one of the newest vessels sailing Europe’s waterways this season after leaving a Frankfurt shipyard on its maiden voyage in April, is designed for spacious and luxury cruising with the 135m craft only accommodating 168 passengers to guarantee uncrowded public areas. And, rather than the old-style vessels finished in garish tones that look like they were decorated by Disney on LSD, Amadeus Silver III is smart and serene with a sophisticated palette that rolls through greys and blues with citrus accents.

My suite is on Mozart Deck, with three floor-to-ceiling windows, including one section that slides to reveal a balcony and let warm afternoon breezes drift in, and when we’re sailing I recline on the lounge in the corner so need only lift my eyes from my book to take in the views.

“Other vessels of this same size carry more than 200 guests,” says Scholl. “We also have some of the biggest guestrooms on riverboats; suites are 25sq m and regular cabins 20sq m, all with walk-in robes, a comfortably large ensuite, and a window that opens, which is an in-demand feature.

“Guests want more space in their cabins because they want to spend more time there, especially on longer cruises, and we have ships going to the Danube Delta, which is a 14-day itinerary with guests regularly opening the windows to enjoy the cruising rather than venturing on to deck.”

I certainly enjoy the extra living room, not only because it provides a private perch to take in the landscape as we move around the Low Countries, but because it offers ample surfaces to place the vases I fill with tulips purchased during each visit to shore.

This is Europe in springtime after all, so who can resist buying bunches of beautiful blooms when wandering cobbled lanes bathed in the first days of sunshine after an icy northern winter.

Sarah Nicholson was a guest of Amadeus Cruises

Amadeus Cruises offers a selection of 2017 European river itineraries including Tulip Serenade: Dutch & Belgium Waterways, from $3145 a person twin-share. Amadeus Silver III sails between Amsterdam and Basel, Switzerland, on the Classic Rhine & The Swiss Alps itinerary until the end of September this year. The Keukenhof opens from March 23-May 21 in 2017. 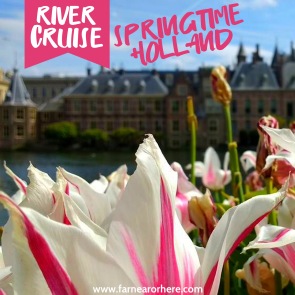