NOT too long ago travellers were happy to stop in Singapore on the promise of nothing more than a gin sling at Raffles and an Orchard Rd bargain.

But as the city continues to evolve into one of the world’s most dynamic destinations and visitors seek a holiday like no other in a country effortlessly blending tradition and modernity, new experiences come on line every week and old favourites rapidly evolve.

Michelin eating on a budget

Singapore is now the only place on the planet where foodies can sample Michelin-rated meals for spare change as two famous hawker stalls have gained single-star status in the prestigious dining guide.

Singapore is new territory for Michelin and its first handbook on Lion City eating was released in 2016 with Joel Robuchon Restaurant (below) at Resorts World Sentosa the only address to receive three stars.

The Crowne Plaza Changi Airport (below) — crowned the world’s best airport hotel by Skytrax in 2015 and 2016 — has a new wing, increasing the popular property’s accommodation options by 75 per cent.

The Crowne Plaza is linked to Changi’s Terminal 3 by an air-conditioned tunnel so travellers can step from aircraft to hotel room in minutes.

Singapore is an easy place to explore, thanks to myriad transport options — a rail network with five lines, buses darting in every direction, bumboats on the river, cheap and clean taxis, and now tourists can add cycling to that list by joining a Let’s Go Bike Singapore expedition.

Daniel Tan has put together three tours that allow visitors to get under the skin of his home town by exploring zones away from the tourist trail. Cycling adventures are hosted by experienced guides with each pedal-power tour taking four hours.

Eat out, by bus

Eating is Singapore’s national pastime with the new Makan Bus — “makan’’ means “eat’’ in Malay — offering a hop-on/hop-off experience deep in some of the island’s most intriguing neighbourhoods to sample signature dishes in hawker centres and shopping streets.

There are 10 stops on a “flavourful route’’ winding from Orchard Rd to Balestier, Thomson, Ang Mo Kio, Bishan and Toa Payoh with sugar cane juice, mee rebus and goreng pisang just some culinary creations on the Makan Bus menu.

Everything old is new again

The former Joo Chiat Police Station, a heritage gem built in 1928, has morphed into the Hotel Indigo Singapore Katong (below) with the 131-room abode welcoming its first guests a few months back.

While the modern hotel boasts the signature flourishes of the hip Indigo brand — reflecting the culture, character and history of its neighbourhood — the real joy is outside because the hotel is in a traditional Peranakan, or Straits-born Chinese, area.

Escape the big-city bustle and board a boat at Marina South Pier on a 5km journey south to Kusu Island to discover beaches perfect for swimming, lagoons set for snorkelling, and trails ready for hiking.

Kusu is home to an assortment of sacred sites including a hilltop shrine crowning 152 steps the faithful climb to ask Malay saints for health and harmony.

Islands can be your own

While Kusu is accessible only to day-tripping visitors, there are ample overnight options for those seeking an island escape with Nikoi, Telunas and Batu Batu exclusive sanctuaries offering solitude, and Sentosa is a haven with several places to stay.

Cempedak (below) will be added in March 2017 to the region’s register of private-island retreats when the adults-only property, developed by the team behind family-friendly Nikoi, unveils 20 secluded two-storey villas with private plunge pools a little over two hours from Singapore.

Tribe Tours has revamped the guided excursion by developing an inventory of exclusive outings — Disappearing Trades, Ultimate Food Journeys, Drinks of Singapore, Everton Park Walkabout, Day Out in Changi are just some of the routes — curated by locals who know their part of the Lion City better than anyone else.

The small-group tours are designed to immerse visitors in daily life, with an array of “meaningful sights that fit in with the theme of interaction’’ included to provide a glimpse into the city and its people.

An old favourite has changed

Timbre+ (below) is propelling Singapore’s hawker tradition into the future with this innovative urban food hall on Ayer Rajah Crescent, a block from the One North MRT station, offering a combination of fine dining and casual eats.

“Where music feeds the soul and food feeds the body’’ is the gastropark’s philosophy. There are 14 eateries under the Timbre+ roof with two stalls staffed by new-generation hawkers, a swag of eateries owned by local and expat chefs, and a handful of ma-and-pa operations ready to serve food at all hours.

The city is made up of unique neighbourhoods and while Tiong Bahru, Haji Lane and Holland Park have been in the spotlight, it’s now Jalan Besar that’s the focus of urbane locals and curious travellers.

The district lingers beside Little India and it’s all about cafe culture with establishments like Chye Seng Huat Hardware, The Bravery Cafe, Antoinette, Suprette, Druggists, The Refinery and 1925 Microbrewery & Restaurant suave locations to drink and dine. 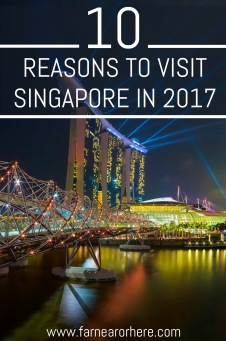