IT’S easy to see why the residents of Ogimachi were able to live their traditional lifestyle for so long.

The Japanese village, which has been on the UNESCO World Heritage register since 1995, sits on a plot of flat river-side land at the foot of steep hills and towering peaks and this geological barrier makes it feel like the settlement is cut off from the outside world.

From the panoramic lookout at the Ogimachi Observation Point I can see the collection of traditional farmhouses, many of which are more than 250 years old, clustered around the narrow main street that doubles as the only road in and out of the community.

For centuries, the people of Ogimachi, in the Shirakawa-go region of Gifu Prefecture, remained isolated from the outside world and went about the business of growing rice, mulberry trees and silkworms.

There are hundreds of these quaint villages in this elevated part of Japan’s Honshu Island, but it’s the handsome gassho-zukuri houses that make Ogimachi so special.

Gassho-zukuri means “constructed like hands in prayer” and locals say the steep thatched roofs look like a Buddhist monk’s hands pressed together in prayer with the unique building style evolving over many generations to make the structures strong enough to withstand the heavy snow that falls during winter.

They are built without nails, with vast attics designed to provide extra indoor working space, and from a distance it looks like each roof is made by simply stacking layers of dried grass.

When I get close I see that an intricate system of ropes, rafters, wooden pegs and thick clumps of grass laid at different angles make the houses strong and waterproof. UNESCO says the timber farmhouses are the only examples of their kind in Japan.

“Despite economic upheavals, the (village) of Ogimachi (is an) outstanding example of a traditional way of life perfectly adapted to the environment and people’s social and economic circumstances,” the UNESCO report says.

“Located in a mountainous region that was cut off from the rest of the world for a long period of time, these villages with their gassho-style houses subsisted on the cultivation of mulberry trees and the rearing of silkworms.”

During the Edo era (1603 to 1868), when farmers in other parts of Japan relied on rice to earn a living, those living at the foot of Mt Haku-san had to find an alternative because of a lack of land so they used their attics to cultivate silkworms and sold the raw silk to cover their taxes and buy the provisions they needed.

Today there are 114 gassho-zukuri buildings still standing in Ogimachi and visitors can go inside some to see how they were constructed and divided for living, entertaining and working.

The Wada house, one of the largest traditional structures in the region, is one of the residences you can visit. The descendants of the original owners still live in some of the rooms.

Masahita Wada, who knows his family history back to the Edo days, explains that the dwelling is so grand because the relative who built it was the village mayor and the keeper of the gate protecting the settlement. 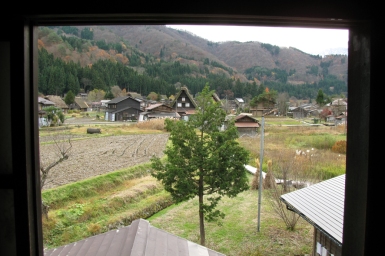 Downstairs, small rooms covered with tatami mats and divided by ornate wood carvings and sliding screens were where the family worked and entertained.

A set of steep steps, more like a ladder than a staircase, climbs into the attic. It’s decorated by the ropes that lash the tight bundles of thatch to the rafters of the high frame that is designed to move and flex during earthquakes and typhoons.

The Nagase and Kanda houses also are open to visitors, who can pop in while walking the quiet lane to the Myozen-ji Temple. 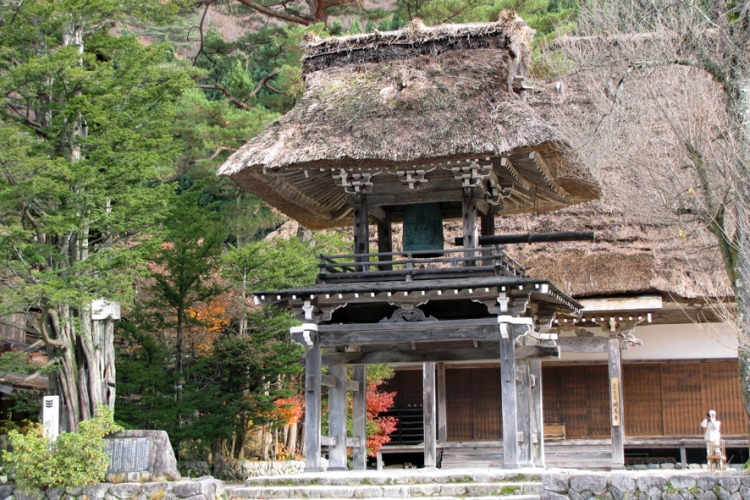 Tucked into the base of the hill on the eastern edge of the village, the Myozen-ji Temple was built in the early 1800s. You will know you have found the temple when you see the shoro-mon, the wooden gate with a big bell hanging under the thatched roof.

This is one of the prettiest corners of the village, with a cluster of gasshozukuri houses and holy buildings set around the small rice paddies.

If you want to sit and gaze at the picturesque scene for a while, or to rest tired legs after the slow walk around the village, then head inside the simple but stylish coffee shop opposite Myozen-ji’s grand gate.

The cafe’s owner has been serving coffee, and only coffee, for three years and renovated his traditional Ogimachi family home so customers could sit on tatami mats in front of a long window that frames a view of this idyllic enclave.

There is no sign on the outside of the comfortable coffee house, just walk from the main street towards the Myozen-ji Temple and look for the building on the left with a reproduction of Rodin’s statue The Thinker by the front door.

I had two cups of coffee, because I didn’t want to turn my back on the view before thoroughly soaking it in.

It was good coffee, and the vista made it even better.

The writer was a guest of the Japanese National Tourism Organization

JAL flies from Sydney to Central Japan International Airport, with a stop at Tokyo. A train will take you from the terminal into Nagoya. Trains leave Nagoya for the mountain town of Takayama about every hour – the journey takes 140 minutes – and from there it’s a 50-minute drive to Ogimachi.

You can do a day trip from Takayama or make a stop on the journey to Kanazawa, with the Nohi bus visiting the Shirakawa-go village.

Irori, which is on the main road near the Wada house, is a restaurant set inside a gassho-zukuri building that serves a traditional meal. A good option is the hoba miso, which is soybean paste cooked on a magnolia leaf over a clay pot.

The Japanese National Tourism Organization website has everything you need to know to plan a visit to Japan.