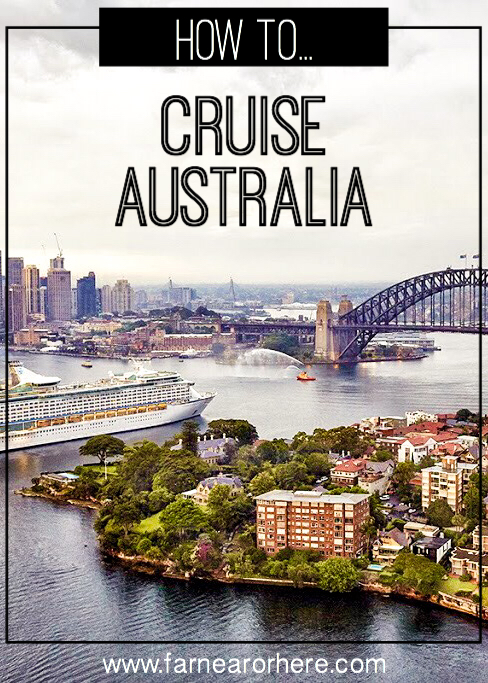 AUSSIES are infatuated with cruising our coastline and it doesn’t look like the affair will end soon.

The Cruise Lines International Association (CLIA) reports Australia will welcome “an unprecedented number’’ of passenger liners this cruise season — about 60 — and they’ll make more than 1000 port visits before the end of April.

“The expanding range of regional cruise options has prompted a surge in local passengers choosing to cruise close to home,” he says.

“Based on last year’s trends we expect to see itineraries under 14 days remain most popular, but we are seeing trips of more than 22 days surge in popularity, growing by over 20 per cent.

“With these trends we expect another exciting summer season with thousands planning their next journey during Plan-A-Cruise Month.”

Royal Caribbean Australia’s managing director Adam Armstrong says customer feedback suggests cruising is tops with locals keen to explore their own patch because “guests can delight in the travel itself rather than just the destination’’.

“For a vast island like Australia cruising really does make sense and instead of driving hundreds of kilometres Aussies can take the leisurely option by wining and dining in specialty restaurants, watching a show, trying unique on-board activities, and waking up in a new port each day,’’ he says.

“We’re seeing demand continue to grow for our Tasmanian and short-sampler voyages, which saw a 21 per cent increase in Aussie passengers last season, and we expect that number to grow by a further 39 per cent this season such is the demand for locals to explore their own backyard on a cruise.

“The port most visited by our Aussie guests last season was Hobart, where MONA and Mount Wellington prove to be a big pull, and Darwin came in second with offerings like the jumping crocodiles and Litchfield’s waterfalls appealing to guests.’’

The biggest development in domestic cruising is the addition of new destinations with companies expanding the inventory of port visits and shore excursions to help vacationers see bucket-list locations around the land.

Wollongong is a popular stop on Royal Caribbean journeys after Radiance of the Seas (below) made the city a new passenger port last October and upgrades to the Port of Newcastle will open the Hunter to megaships with Australia’s second-largest boat Explorer of the Seas set to call in February 2019.

P&O returned to Townsville in April 2017 after a six-year absence — the company will test the city’s ability to serve as a home port next September by conducting a mini-turn around that will see 400 passengers board Pacific Eden — and Azamara is adding regional centres to the West Australian coast.

“When looking for new ports we consider a number of factors such as whether the location is a good fit for itineraries and if we’re able to dock close to the city centre,’’ says Azamara director of destination planning Michael Pawlus.

“In 2018 we’ll be introducing our Australian Explorer which is an immersive way to see Australia and includes maiden calls for the line to Exmouth, Fremantle, Bunbury, Esperance and Albany as well as Kangaroo Island (below) and Adelaide.’’

While itineraries are packed with port stops there will always be days spent at sea and every ship’s crew toil to keep passengers entertained when there’s nothing but deep blue inside the horizon.

“Modern cruise operators must offer an on-board product that appeals to more people, with a range of interests and tastes, and that means serving up activities during sea days that go beyond the traditional ship entertainment,’’ P&O Cruises’ president Steve Myrmell says.

“P&O aims to offer more choice, with more than 60 activities on board every day, and passengers can grab a thrill on the longest waterslides at sea or chill out during a game of lawn bowls with a panoramic ocean view on the outdoor green.”

“On our Kimberley cruises our 26-guest yacht can get into the channel of the magnificent Montgomery Reef and into the heart of Silvergull Cove (below), places larger vessels can’t reach, and it’s special to experience the raw magic with just a handful of fellow guests instead of hundreds of passengers on a larger liner.

“Aboard smaller ships the crew became your friends and it’s easier to make friends with other guests, with less regimentation and no queuing or crowding it’s more relaxed aboard, our vessel is small enough to offer spontaneity, and our itinerary is flexible so we go where the weather and wildlife are best.’’

The cost of cruising Australia

Kara Lane from ecruising.travel says there’s never been a better time to book a domestic voyage with competition between cruise companies and the increasing number of ships serving Australia combining to bring better rates to holiday makers.

“For a three-day escape prices start at $349 per person for a twin share inside cabin through to $959 for a balcony, while a seven-day sailing can start from $979 per person, and to secure the best deal when travelling with the family in holiday periods book early as triple and quad-share cabins go first,’’ she says.

“For other travellers last-minute specials are great, especially if you’re not fussed on cabin location and can depart at a moment’s notice, and cruise lines always have specials running so check inclusions with everything from complimentary upgrades and on-board credits to free Wi-Fi and beverage packages on offer.’’