QUEENSLAND’S River City is booming with more hot new accommodation offerings than you can count on all fingers.

From glamping tents and riverside wharf residences, to moody five-star digs and a 1920s-era bank turned 220-room hotel, each new gem is embellishing the Brisbane skyline with their own quirk and character.

Here are the latest Brisbane hotels seriously upping the ante… 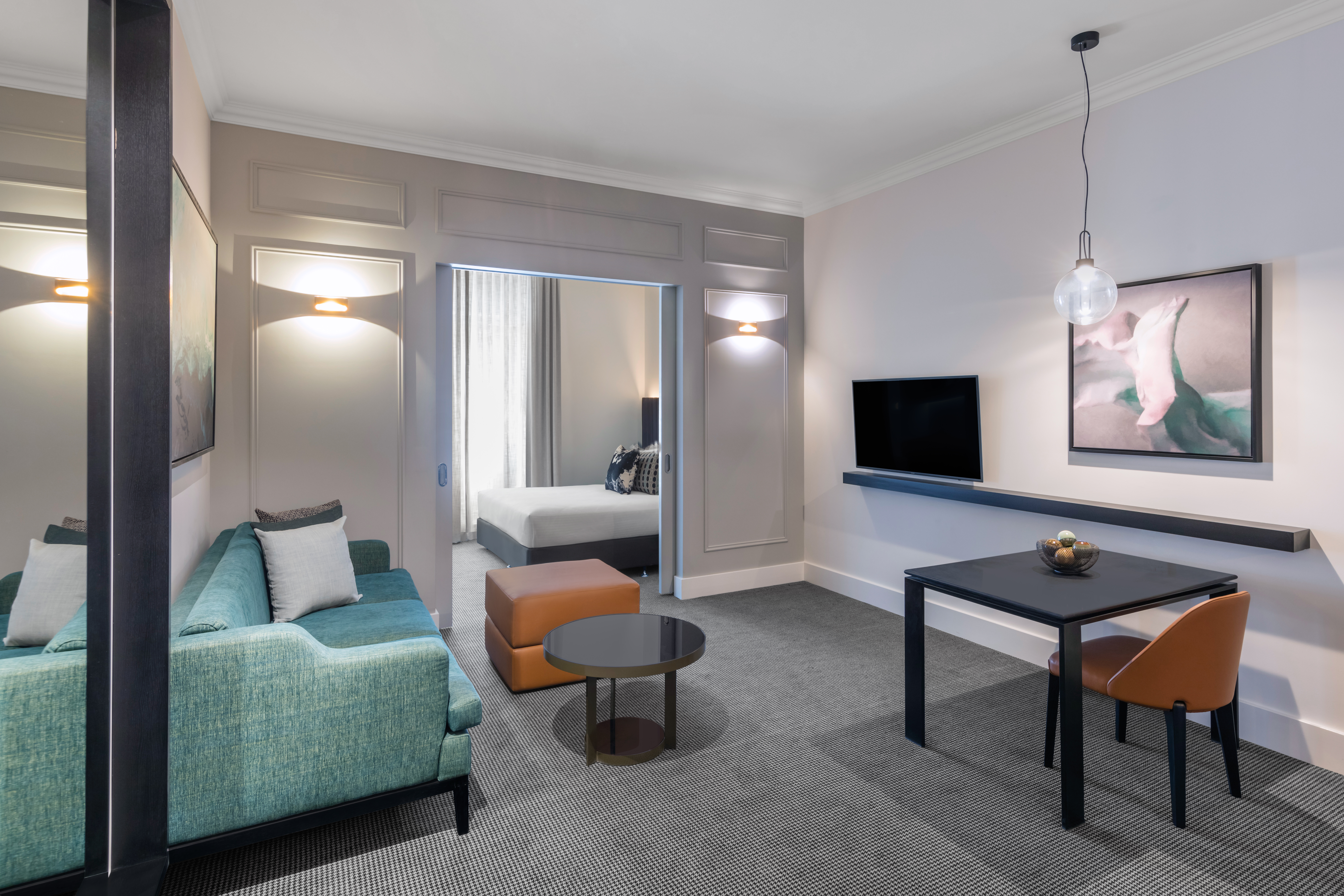 Ovolo is continuing its Brisbane expansion with the transformation of the former Emporium Hotel Fortitude Valley.

The “ovolution”, which started with the rebranding of the property as The Valley Brisbane, will incorporate a transformation of rooms and public spaces before evolving into Ovolo The Valley at the end of 2018.

New food and drink concepts and the celebrated “freebies” — free mini bar, breakfast, wifi, happy hour and all-day snacks — will be introduced to complete the evolution and Ovolo The Valley marks the second Brisbane property for the brand after the opening of Ovolo Inchcolm hotel in April 2018.

W Brisbane is the first five-star hotel to open in Brisbane with the settlement the only Australian city with a W Hotel.

Located at 300 George Street, on the site of the old law courts and offering views from South Bank to Mount Coot-tha, the W Brisbane boasts three bars and restaurants — including the renowned Three Blue Ducks from The Farm at Byron Bay — in addition to 312 guestrooms. 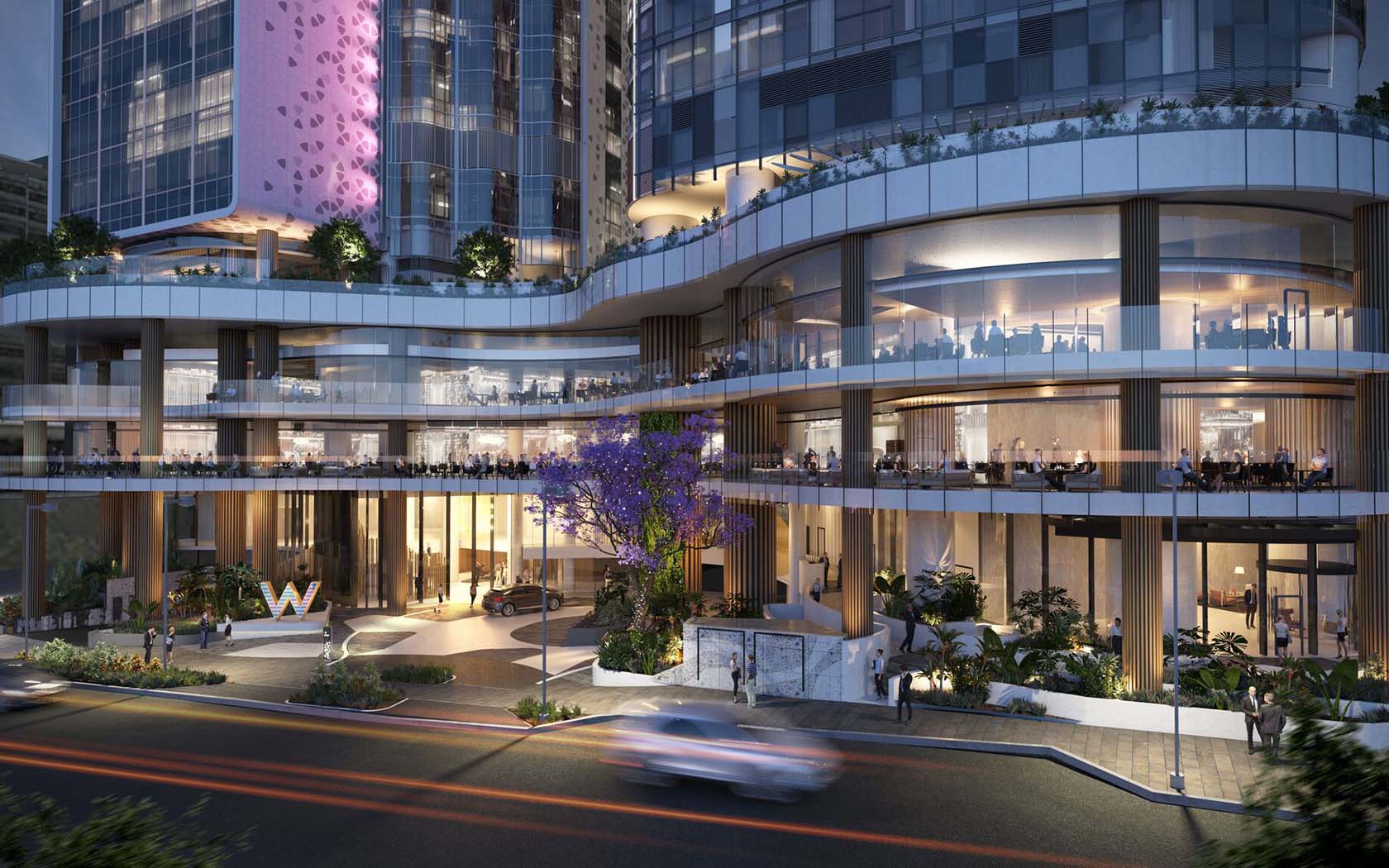 The design of the hotel pays tribute to the local Indigenous culture and the river culture that defines Brisbane, with the motif snaking throughout, and equipped with the iconic “Whatever, Whenever” W service — meaning guests can pick up the phone and ask for anything that is legal — the hotel is certainly raising the bar on Brisbane’s accommodation offerings.

Change is afoot on the south side of the snaking Brisbane River and the new Novotel South Bank is prepping to provide for the corporate set and savvy culture vultures amongst us.

A walkway links the hotel with the Brisbane Convention and Exhibition Centre so guests can go from conference to cocktails in the lobby lounge and wine and dine clients in the on-site restaurant.

If you’re looking for a “grape” way to glamp look no further than Queensland’s first winery glamping experience, a 30-minute drive south of Brisbane, at Sirromet Wines Estate.

A cluster of “Sanctuary by Sirromet” safari-style glamping tents sit across the 9ha property, amongst the natural flora and wildlife, with fully-furnished amenities to make you feel at home. 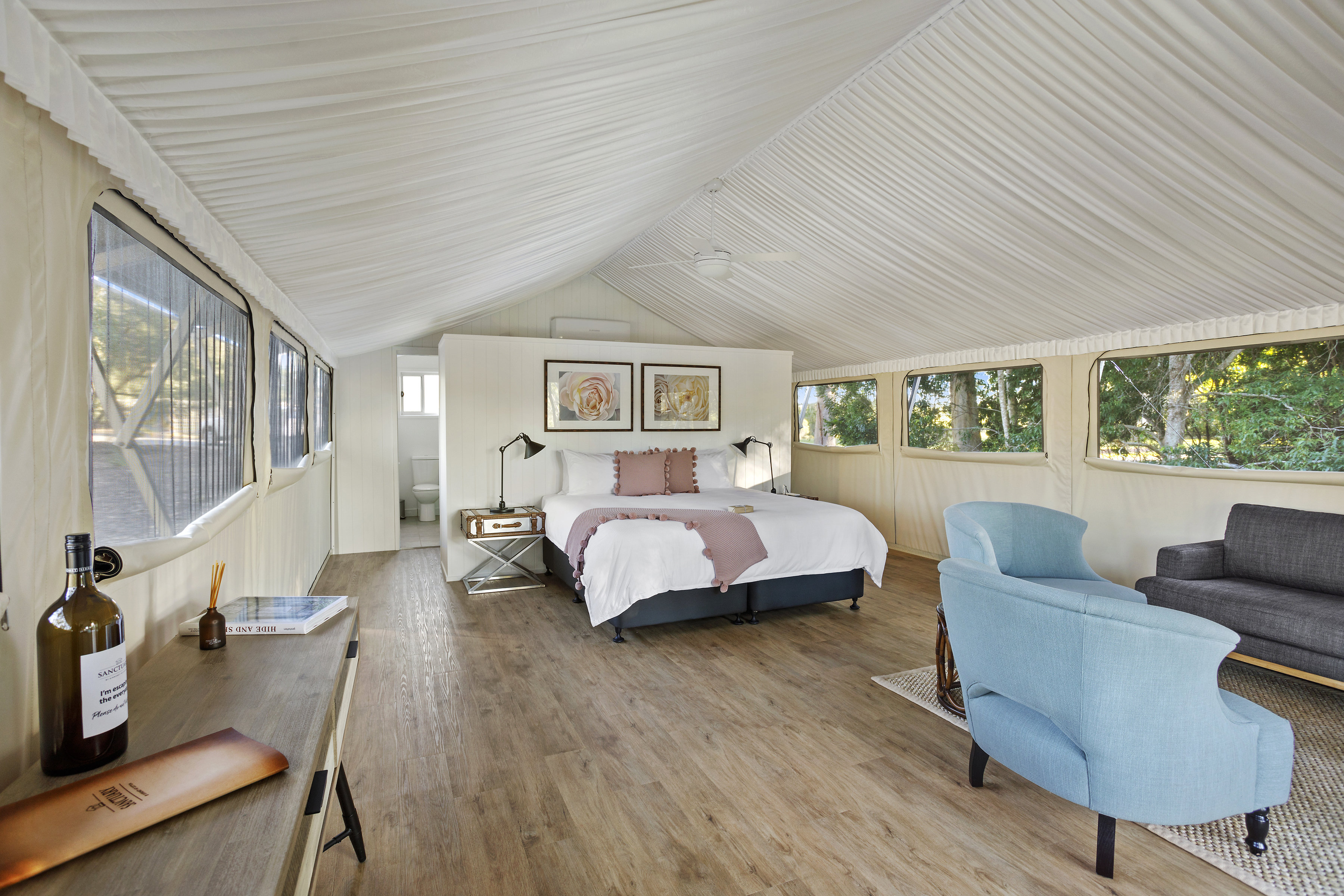 Located in Spring Hill the Georgian hotel and former medical practice, built in 1924,  boasts 50 guestrooms with an average room size of 35sq/m including the two-bedroom General Macarthur suite named after the five-star US Army Chief of Staff who was treated there while stationed in Brisbane during World War II.

The versatile hotel is designed to suit both business and leisure travellers and the hotel marks the first Brisbane flag for Ovolo and opens six months ahead of the brand’s second property due to be revealed later this year on the former Emporium site in Fortitude Valley.

Seaside opulence lies a stone’s throw from the shores of Margate Beach at The Sebel Brisbane Margate Beach which is the latest boutique hotel in Moreton Bay. 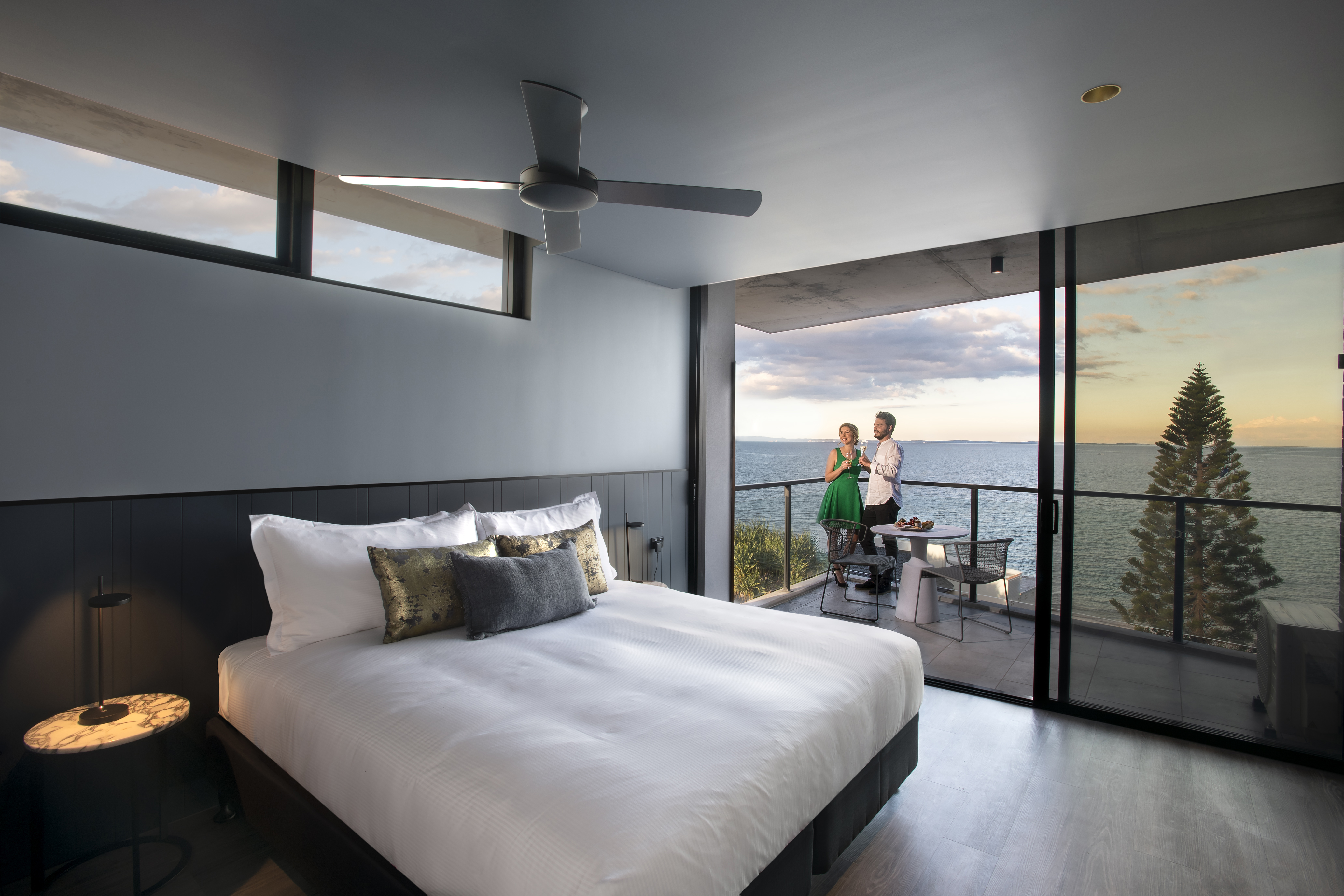 The $15 million-dollar hotel, which opened 29th May and is the 9th property to operate under the Sebel brand in Queensland, features 58 rooms boasting neutral tones, minimal furnishings, and panoramic ocean views.

It’s a 20-minute drive to Brisbane Airport and just 40 minutes from Brisbane City while being close to local transport options. www.thesebelbrisbanemargatebeach.com

Flatiron skyscrapers are no longer synonymous with the New York City skyline with the classic structure reimagined at FV by Peppers.

This 970-room luxury hotel has 970 rooms and is the newest addition to Fortitude Valley’s accommodation offering one and two-bedroom apartments featuring neutral tones, minimal furnishings and floor-to-ceiling glass for Brisbane City views. 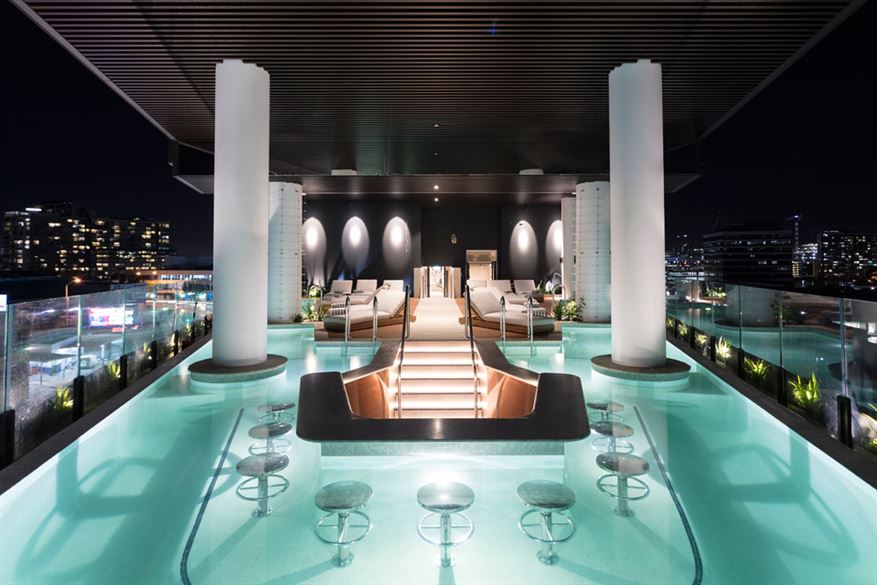 The minimal décor is made up of stellar on-site facilities like a heated skyline pool with swim-up bar, moonlight cinema and a yoga retreat.

The hotel,  which forming part of the $600 million Southpoint precinct on Grey Street, features 143 luxuriously appointed suites including some with free-standing baths and city views.

Prepare to say hello to The Calile Hotel which is a seven-storey “urban resort” that’s home to 175 rooms, a mix of boutiques, cafes and restaurants, and a pool terrace.

The hotel’s leafy, urban streetscape will pay homage to Brisbane’s subtropical climate, with an adjoining micro-precinct Ada Lane set to have lips smacking with five new eateries and bars.

The next five-star jewel in the dazzling crown that is Brisbane accommodation will be The Westin with 286 rooms a swim-up pool bar known at the Nautilus, and a dedicated restaurant precinct serving regional and international cuisine.

Keen to get active but forgot to bring your gear? No worries as the Westin has partnered with New Balance through their WestinWORKOUT program to lend you some brand new activewear during your stay.

The Howard Smith Wharves revitalisation project is set to redevelop an underutilised site into a lifestyle, entertainment and events precinct on river-front land under the iconic Story Bridge.

The site will introduce a five-star Art Series Hotel with 164 rooms beside urban chic restaurants, cafes, coffee-roasting and a craft brewery.