AT the end of November every year a magical spell settles on Germany that lasts until the wee hours of Christmas morning.

Right across the country, from villages to sprawling cities, Christmas markets move into town squares and shopping streets with locals visiting these fantastical fairs to celebrate St Nick’s season with family and friends.

Children shriek in delight as they ride merry-go-rounds complete with reindeers and Santa’s sleigh, socialising adults stand around fires that burn in barrels while sipping spicy mulled wine, and those in search of stocking stuffers browse stalls selling everything from woollen socks to wooden toys. 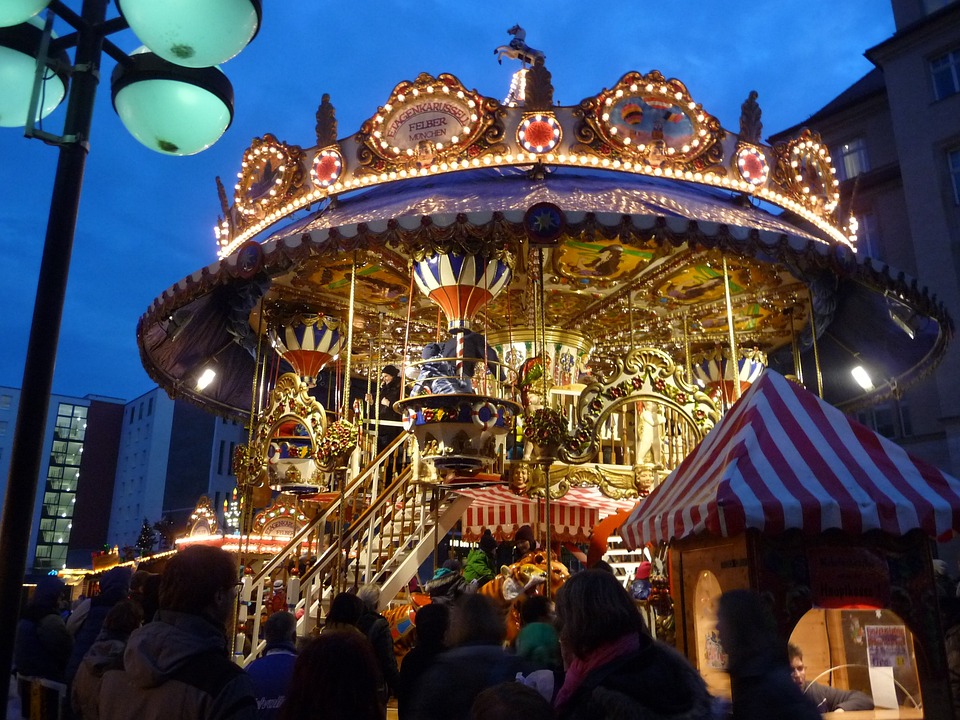 It’s the middle of December and I’m in the heart of Europe doing a Trafalgar Tours itinerary called German Christmas Markets. It’s planned with one thing in mind, to immerse travellers used to a summertime Santa in the joys of a cool winter yule.

My days and nights are filled with trees dressed in sparkling lights, stalls stacked with gingerbread, mugs of mulled wine and oompah bands playing Christmas carols as my group takes in a dozen seasonal souks during the eight days it takes to rove from Frankfurt (below) to Berlin. 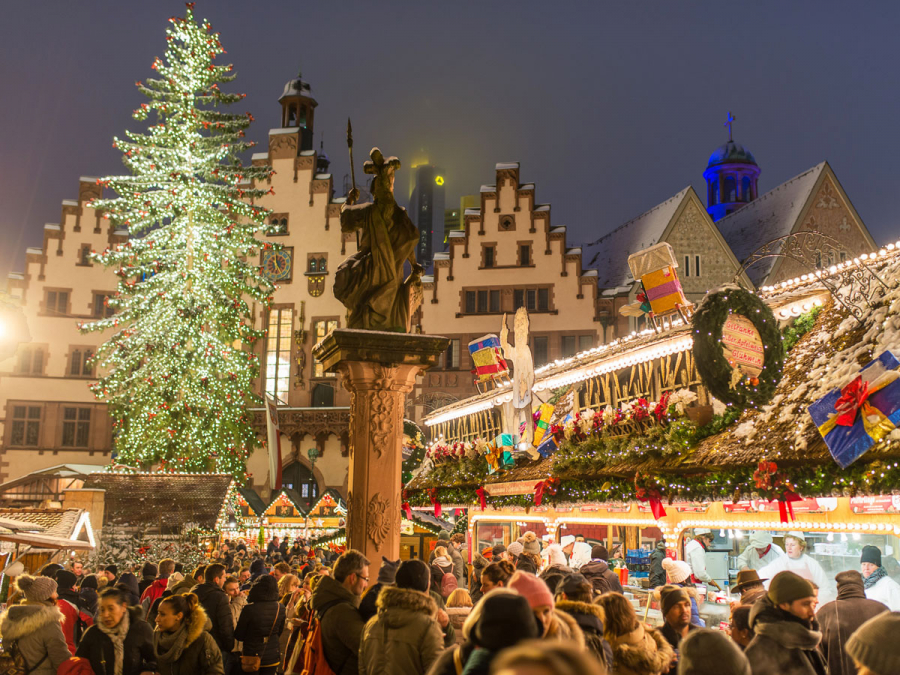 Trafalgar travel director Arne Schmidt – he’s the local host leading the expedition – explains that while Christmas markets are held across Europe, it’s Germany that is considered to be the historic heartland because this is where the tradition started.

“Christmas markets are a Germanic invention and countries having the German language as a background, from Austria and Switzerland to the Czech Republic and Hungary, are known for their Christmas markets,’’ he says.

“They are our culture and when I’m with my daughters we go to the markets a few nights a week to eat and meet the people we don’t see enough during the year and every market is different because every region is unique with special things to eat and drink. 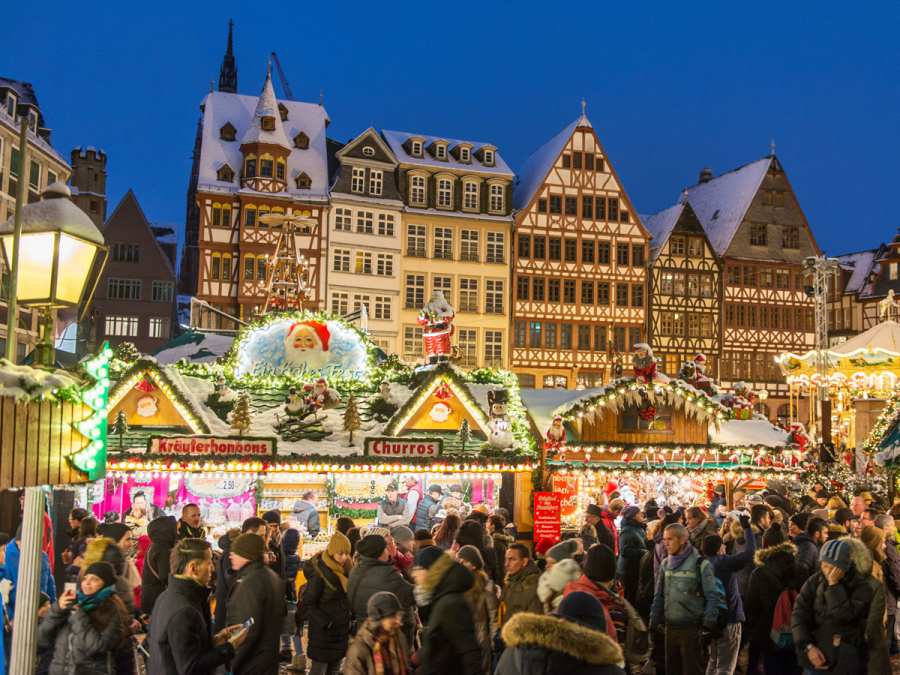 “In Nuremberg it’s gingerbread, stollen in Dresden, people travel to Rothenburg to buy the snowballs we call schneeball and, where I’m from, we love domino stones or dominostein which are biscuits with chocolate coating layers of jam and marshmallow.’’

Christmas markets buzz during the weeks of Advent, typically from November 25 to December 24, with stalls coming to life after breakfast and buzzing to near midnight as locals dressed in their warmest winter woollies stroll the streets.

My Trafalgar group visits some markets in the morning but it’s better after hours when the fairy lights throw a golden glow over the aisles, locals descend to eat dinner and down a few drinks, and carols echo across the cobblestones. 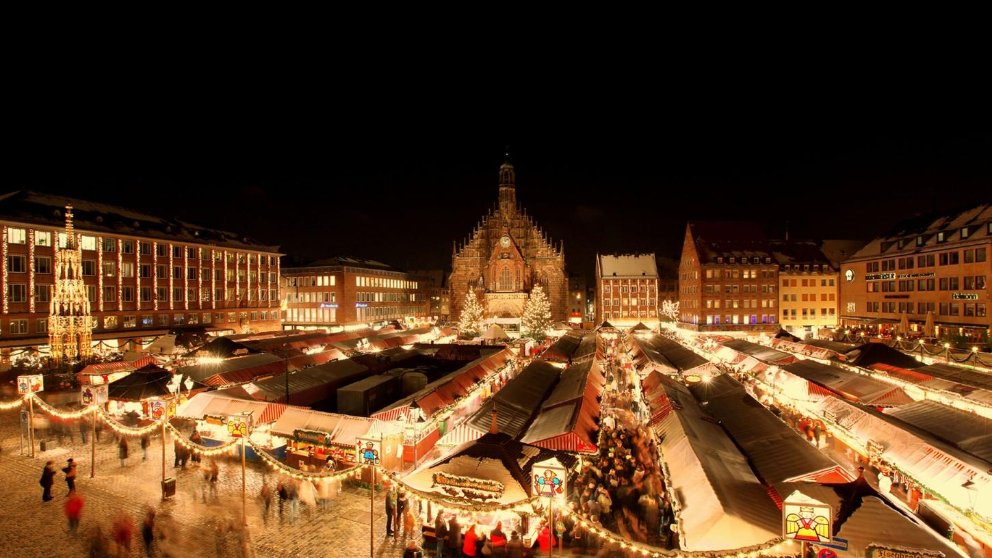 I quickly discover every market is individual and while the big fairs in Frankfurt, Berlin, Erfurt, Leipzig and Nuremberg (above) are fun, I prefer the smaller setups in Meissen, Weimar and Potsdam which take me away from the tourist trail to do December like a local for just a few hours.

But there’s more to my week abroad than silly-season shenanigans, with Trafalgar scheduling enough time in each town to do a spot of sightseeing.

In Berlin I summit the TV Tower (below) to get an aerial view of the reunited capital, tour the porcelain factory in Meissen, find the Merchants’ Bridge in Erfurt to cross a structure inhabited for five centuries and occupy afternoons inside Dresden’s Green Vault to appreciate Europe’s extensive collection of treasures. 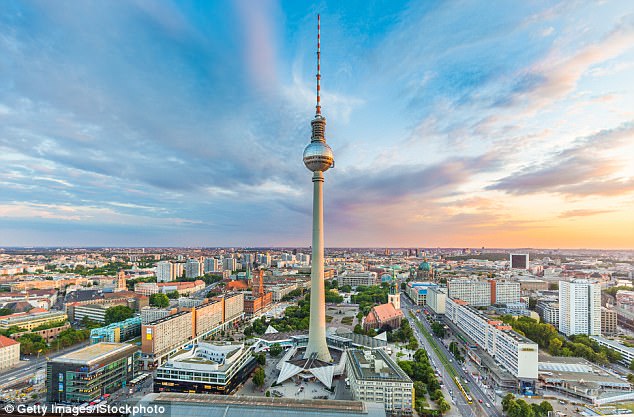 It’s delightful to be in Germany when the weather is frosty but not frigid.

I can sightsee without the summer-season crowds and every place we pass is sparkling for St Nick’s visit, with streets dressed in lights that make neighbourhoods look like fairy-tale scenes once the sun sets.

And while I love every one of the markets, here are six favourites from my December jaunt around Germany.

Germany’s capital of commerce has been home to a Christmas market since 1393 with hundreds of stalls and food vans crowding the pedestrian lanes and cobbled squares of the Old Town, from the riverbank to the Romberg, where chocolate-box dwellings flank the stalls. 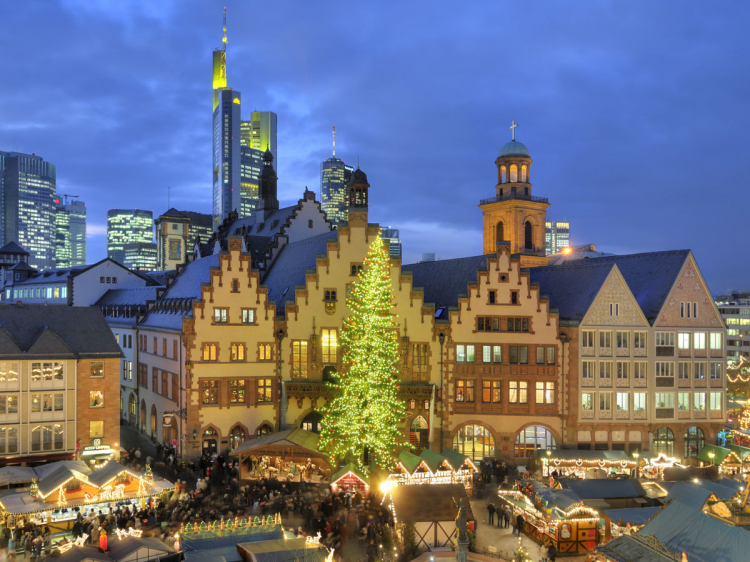 Food is the focus in Frankfurt and while this is the spot where I snack on what I’m sure are the world’s best pommes frites there’s also candied apples, roasted nuts, chocolate-covered bananas, marzipan cookies and hot apple wine on the menu.

This walled medieval community in the heart of Bavaria is home to one of Germany’s favourite markets and, while it’s far from the biggest or oldest, it is one of the prettiest with a few dozen stalls lining the lanes and the 16th century Town Hall looming above the aisles in Marktplatz.

Rothenburg is also home to what locals claim is the world’s largest Christmas shop, the emporium on Herrngasse open all year and boasting a labyrinth of rooms overflowing with ornaments. Keep following this street to see the Castle Gardens if you do visit. 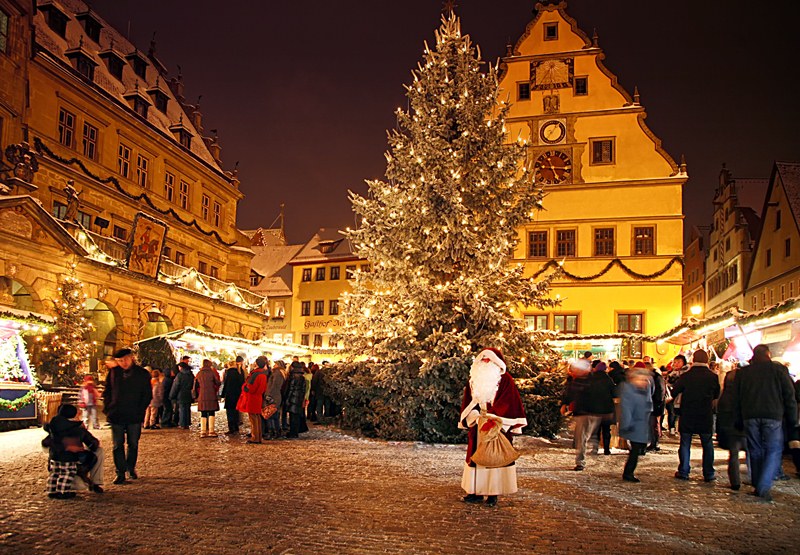 A swag of German cities claim to host the most substantial Christmas market with Nuremberg a serious contender, thanks to the bustling Christkindlesmarkt that’s been around since 1628 and fills the vast Hauptmarkt with hundreds of stalls.

Local musicians and thespians perform on the stage beside the Frauenkirche’s gothic facade every evening, stalls sell only handmade gifts with mass-produced items banned, and every visitors should eat at least one Nuremberg bratwurst with the city’s signature sausage cooked over an open beechwood fire.

Wartburg Castle sits on a snow-covered summit above Eisenach in Thuringia. This UNESCO fortress built in the 11th century is the spot to see one of the country’s most theatrical Christmas markets, with the whimsical carnival taking on a medieval tone.

Counters squeeze into every space around the maze of hilltop buildings, stallholders dress in costumes suited to the setting, puppeteers and troubadours perform in the courtyards and craftspeople from the region sell their wares while showing off bygone skills. My Trafalgar Tours’ excursion visits 11 Christmas markets but Weimar is my favourite because it not only has an authentic feel, with locals browsing the stands filling the square beside the gothic Town Hall and pedestrian avenues leading to the Concert Hall, but is the best for shopping and I pick up a pile of presents for my two-year-old niece.

Weimar was the first German address to put up a public Christmas tree, back in 1815, and the tradition continues with a tall sparkling spruce standing in Marktplatz, as well as a rink for outdoor ice skating and buskers playing classical melodies between stalls to entertain shoppers. 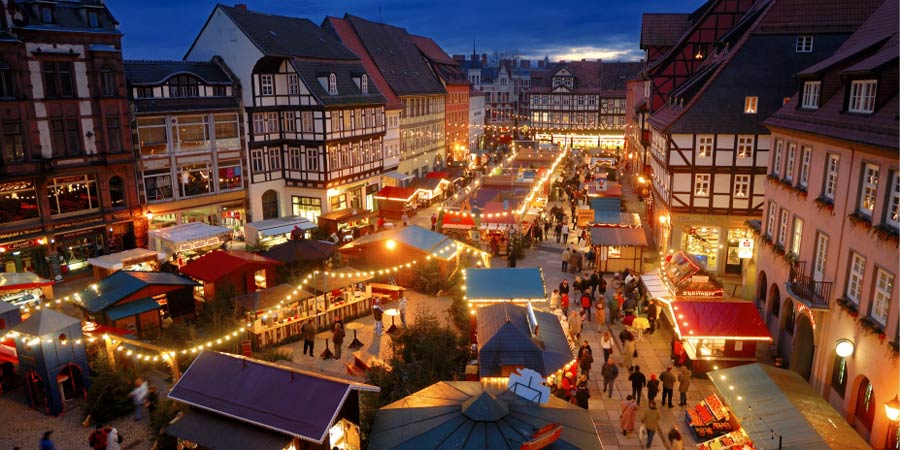 Those in the know say Dresden has more Christmas markets inside the city limits than any other settlement in Germany’s east, with long rows of counters not only filling every medieval platz and Soviet-era square but lining the pedestrian boulevard from the station and filling Old Town lanes.

My favourite is the Royal Palace market with the former stables transforming into a village lifted from a Brothers Grimm tale featuring blacksmiths and glassblowers making gifts, minstrels and jesters providing entertainment, and the scent of hot chocolate drifting across the stalls. 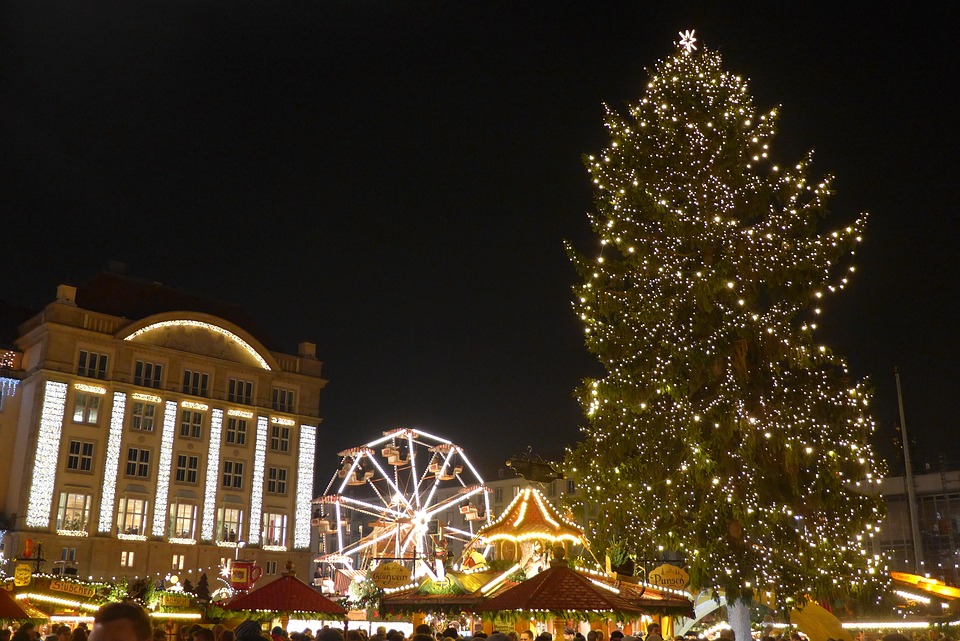 Trafalgar Tours has eight departures of the German Christmas Markets itinerary in 2019 — between November 28 and December 12 — with the seven-night excursion travelling from Frankfurt (below) to Berlin by private coach and including 11 meals, six optional excursions, and stops at least 10 festive fairs.

Wear comfortable shoes as feet quickly fatigue crossing the cobblestones, it’s getting icy in December so pack the woollies to be snug during long stints outside, take a reusable shopping bag to carry goodies purchased while exploring each Christmas market, and ensure there’s ample suitcase space to get gifts home. 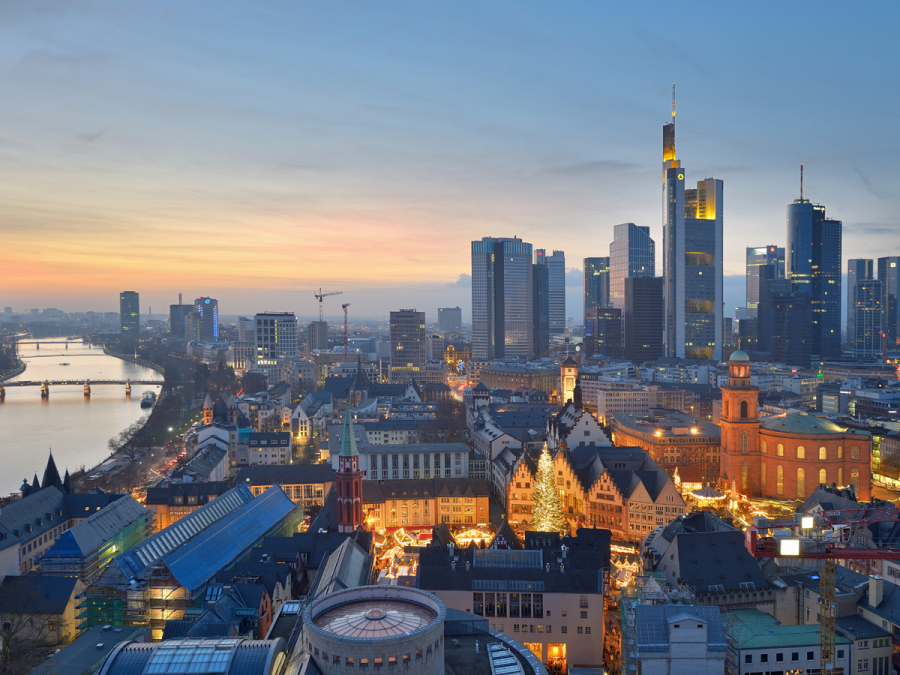 → The writer was a guest of Trafalgar Tours