PAULA Wasiak is ready to work so she pulls on a grey glove that covers her arm almost to her shoulder, settles into the long grass, and reaches into a burrow below a leafy green shrub.

It seems like a precarious activity on a hot Victorian day, when slithering creatures tend to linger just out of sight, but the scientist assures me the snakes on this part of Phillip Island are so shy they get out of her way long before she invades their territory.

There’s a sudden flurry of subterranean activity as the Phillip Island Nature Parks’ staffer gropes underground, with a few unhappy bleats from the creature that’s just had its morning nap disturbed, and Wasiak retrieves a little penguin chick.

The eight-week-old baby doesn’t put up much of a fight as a wand is waved above its head to read the unique microchip number that identifies it but squirms with irritation when tucked into a blue sack to be weighed.

Readings are recorded and measurements taken before the chick is placed back in its hideaway and Wasiak reclines into the windblown grass beside the neighbouring nest to retrieve the next Phillip Island little penguin due for a health check today.

The Phillip Island Nature Parks’ scientist, who has university qualifications in zoology and conservation, is one of the organisation’s research officers monitoring the destination’s famous little penguin colony.

“It’s important for us to know what the little penguins eat so we can protect their food sources, how far they swim to feed, and what impact tourism is having on the animals,” Wasiak explains.

“There are 32,000 birds in the Phillip Island colony and we’re very lucky because the little penguin population is abundant.”

Wasiak’s project is one example of the work being done behind the scenes at Phillip Island’s popular Penguin Parade, with the money visitors pay to experience the march injected back into the conservation programs.

Phillip Island Nature Parks – the not-for-profit organisation that manages the Penguin Parade as well as the local Koala Conservation Centre, Churchill Island, and the Nobbies Centre – use the tourism-generated funds to replant native flora, pay rangers and vets, and build the infrastructure necessary to protect wildlife.

The Penguin Parade happens every night as darkness settles on Phillip Island and dozens of birds that have been fishing far from the coast, leaving before dawn and venturing as far as 50km from land, return to the beach and chicks secreted in family holes. 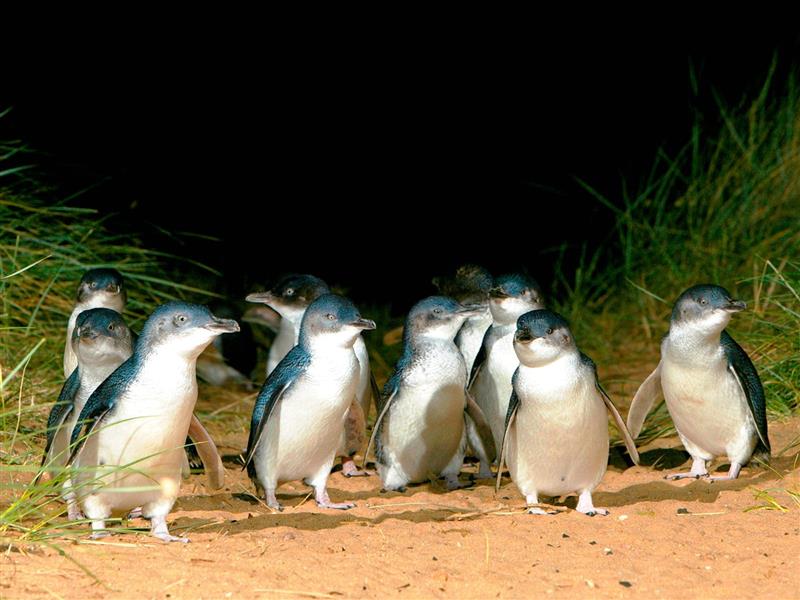 During my visit to the Penguin Parade, which comes a few hours after accompanying Wasiak as she checks on the health of the Shelly Beach chicks, the birds take their time coming ashore with only a few intrepid pioneers leading the way.

But as the first stars appear, and the white foam of the breakers begins to glow in the moonlight, armies of little penguins appear on the sand and overtake slower mates from previous assaults.

After scaling the dunes they cross into the grassland behind the beach and seem to struggle with the incline in a way that makes me wonder if centuries of evolution have made it any easier for these likable creatures to make this uphill hike.

As I watch the penguins work hard, with the squeaks of babies hailing returning parents echoing around the valley, I remember a comment Wasiak made earlier in the day.

“I’ve been doing this job for six years and what still surprises me most is how tough these cute little fury animals are,” she says. 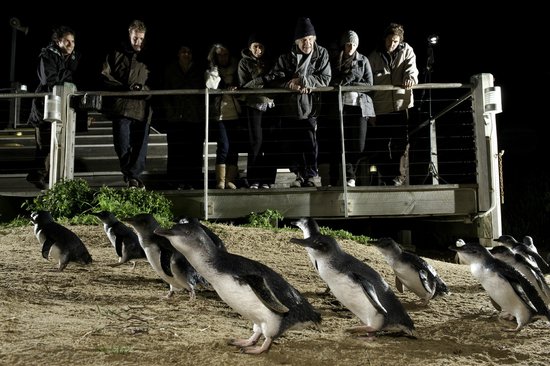 Phillip Island is 140km from Melbourne a little under two hours via the Monash Freeway and Bass Highway. The Penguin Parade Visitor Centre is in the island’s western corner.

The Penguin Parade happens every night after sunset.

The visitor centre is open from 10am every day, from 2pm on Christmas Day. Tickets from $23.80 for adults. Guided tours by a ranger, or even an exclusive research tour, with tickets for those packages costing from $74. penguins.org.au